Okay, I have a confession to make.  Once upon a time I used to draw.  I was what I would call “fair-to-middlin” in my abilities, but I did draw a lot.  Horses mostly, buildings, other animals.  I tried people but they always came out misfigured… disfigured?  Disfigured do to misfiguring?

Well, to move on with the story… or at least where I’m going with things this morning, I decided last night that I should get up early again, like I did when I was working.  Even though I’m laid off and don’t have to get up at 5 or 5:30 in the morning, sleeping later in the day actually means I’m asleep or just barely into “puttering” mode when I hit my most productive time of day.  My inner, baby reptile is still asleep early in the morning so little Rex, doesn’t get in my way.  (Seriously, read the article.  It’s awesome.) 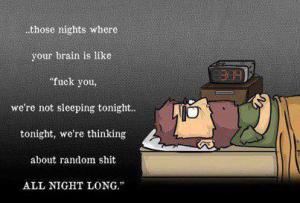 HOWEVER. (It’s a big ‘however’.) However!  MY brain decided that last night was one of those nights where it was going to keep me up thinking about all kinds of useless crap.  I finally watched the season finale of “Burn Notice“… while on the treadmill.  Do you know how difficult it is to be walking at 3 miles per hour on the treadmill while watching a show that is making you cry?  Let me tell you… it’s a good thing I don’t have a gym membership and can do all my walking-on-the-treadmill-and-crying at home.  My brain thought of perfectly suited stick-figurines to draw up with my meager talent illustrating the degree of difficulty that is walking-on-the-treadmill-and-crying (I didn’t do that…. yet).  My brain was happy I’d walked the entire 90 minutes (minus commercials… gotta love a DVR) of the show and was doubly glad that I didn’t take some tragic misstep and end up being shot off the back of the treadmill into the corner as I stumbled around on the moving belt with all the appearance of someone who’d gotten into the liquor, wiping my nose with the back of one hand while wringing my eyes with the other as I gulped for air between sobs.  Now, isn’t that a pretty mental image??

It didn’t end there either.  My brain decided to think about things like Raclette Cheese used in appetizers at a restaurant we’re going to next week for Madison’s Restaurant Week.  It decided to focus on DH’s snoring which is a really bad idea.  On being too hot and sticking out the air-conditioning foot, oh… but now we’re too cold.  How about the whole, “Maybe we shouldn’t have had that third cup of coffee this morning?”

I literally reached a point of tiredness where the logical part of my brain thought, “If I pretend to be asleep, maybe my mind will think that I am asleep… and it will shut up.”

It didn’t work.  Little Rex continued on until after midnight.  Thanks little Rex.

And now you all can thank little Rex for this drawing… according to the articles here, with practice, I should get better.  Oh, and my inner critic, like my brain, needs to just shut up. 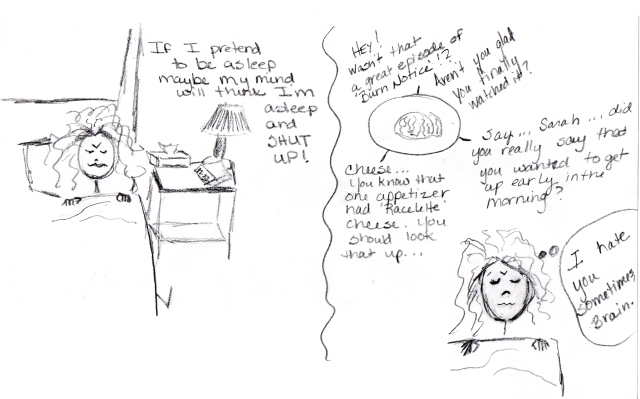 ©2013 Musings of the Amusing Muse – Fifteen minutes of hard work… right here in this drawing.  (Did you know the fine detail of the “Air Conditioning Foot”???)

*https://www.facebook.com/FunnyEcards
*Yours Truly.  For REALZ!