Thoughts for today… putting some slack in the reins.

The term in the horsey-set is “letting them have their head”.  A good, well-trained horse that knows its rider will take care of that rider.  The rider, at least one who knows their horse, knows that they don’t always have to hold tightly to the reins (as long as they aren’t on a high-strung or “hot” horse) – in fact I logged many, many miles on horses past, and passed, where I had only to give some slight heel pressure to the side I wanted them to turn away from or touch the rein ever so slightly on the side I wanted them to turn toward.

I gave up drinking adult beverages for about four weeks (maybe six…holy crap! It was eight weeks!!) except for “Drinkin’ Friday’s” (with exceptions of special occasions).  This self-imposed denial has been difficult even though it’s been accomplishing the task for which it was employed; I enjoy my evening cocktails.  The ritual of them, seeing the sugars swirl in the glass and watching the ice cubes melt bit-by-bit.  There are few things that I romanticize in life and adult beverages are one of them.

Giving up my evening cocktails was slowly eating away at my will-power as I well knew it would.  Spring is upon us and Summer is fast approaching; I felt my cravings for Gin & Tonics and Tiki Drinks gnawing inside of me.  I’d call that craving a wicked, little Monster if I didn’t enjoy its company so much, instead I call it what it is: Little Rex.

Over the last ten years, I have found that strict adherence to a life-restricted by iron will causes me to rebel.  From denying myself new bottles of nail polish to shoes, religiously working out to denying myself the simple pleasure of decadent food or drink, all of that denial – even if it’s for “the greater good” – causes a major rebellion in my head.  There I have been times I have walked into Walgreen’s for one item and left with five bottles of nail polish in addition to what I went in for in the first place.  A trip into DSW could result in an armload of boxes of new footwear accompanying me home.  Hitting the workouts hard for days on end can find me having the temper tantrum of a two-year-old, kicking and screaming and refusing to even look at my treadmill, arms crossed, lower lip out in a severe pout and foot stomping impetuously at the idea of putting on my running shoes. 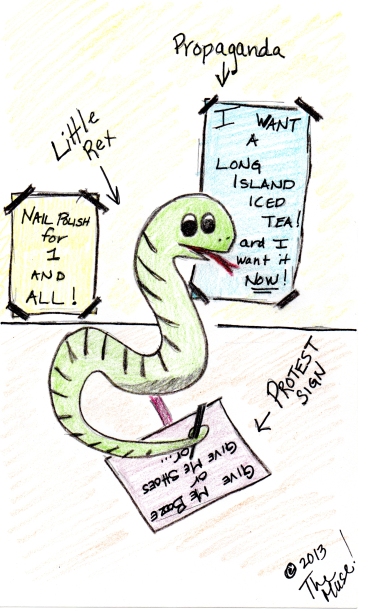 Little Rex working hard. (Yes… I really did draw this.)

It is with those thoughts that I heard the protest cries last week.  Little Rex was chanting and making signs.  Thankfully, L.R. has pretty decent spelling and grammar so I tend to take the protests seriously – as opposed to those that the Tea Partiers hold high.

By Tuesday I was hearing, “You want a Long Island Iced Tea!”  However, I had a photoshoot on Saturday, so I knew I had to wait – and I did, even though I knew that might make the rebellion worse.  Saturday night I made Mr. Muse and I some Long Islands.  Then I made another for myself.  One is good.  Two is “still drunk Sunday morning”.  Bad, Little Rex.

Sunday, I spent over four hours doing some pretty heavy manual labor on the farmstead, mostly moving firewood, burning off the alcohol vapors.  Considering I was also tending the brush pile we had burning – I’m lucky those vapors didn’t catch aflame.  After the day of hard labor, I treated myself to two well-earned Redbridge gluten-free beers, nursing them  over the course of the evening.  Today, after all my work was done, I broke into the gifted bottle of Kinnickinnic whiskey.

Little Rex is considerably more quiet now than he was last week.  In fact, I have a feeling that L.R. is going to go back into that corner in which he hides for a while because I gave him his head, put slack in the reins and let him run until he tired himself out. Hopefully, it’ll be another month or more before I see him again.

Hopefully next time it’ll be a nail polish binge…

6 Responses to Thoughts for today… putting some slack in the reins.