I love dogs.  They are joyous creatures, happy to see most people on the planet, greeting them with boundless tail wags and yipping.  Licks and excited whining.

The Oatmeal has it spot-on with their post My Dog:  The Paradox.  You spend fifteen years, more or less, loving this furry bundle of affection and then they must leave you. 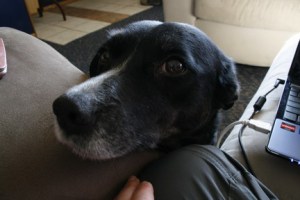 You know you want to pet me.

Shiloh’s, aka Crazy Dog, advancing age has me reflecting on my life with her.  She’s our second “kid”.  (Please don’t mistake me for one of those obnoxious “my pets are my children” people.  I love them but they are still animals.)  Shiloh was my near constant companion in my new home far away from friends and family.  She kept me company when DH was on the road half of every month at his first job out of college.  She was my afternoon partner on the couch for naps and to whom I complained about the weird neighbors.

With a new house, we were joined by her litter mate, Ed, and a sibling from a second litter, RCA (I’ll need to write a post about her one day).  We had other animals, but these three made our “pack”.  Now, we are down to just Shiloh; at thirteen years old, she’s not showing her age much physically, but mentally she had her first “Senior Moment”, that we noticed, the other week.

Cognitive Dysfunction, “Doggy Dementia“, call it was you want, but the fact is that is has begun with Shiloh.  A simple turn outside to “go potty” resulted in a search for a black dog on a black evening, only to have DH find her looking expectantly at the garage entry door… not the patio door of the house.

She bounded to him when he called loud enough and punctuated it with a whistle.  Her tail wagged and she pranced about him excitedly, but for us it was cause for some sadness.  I’d seen dementia in many an older dog when I worked at the vet clinic.  How bad would it get?  What would we have to start doing to prevent “accidents” on the carpet and her getting lost in corners of the house? 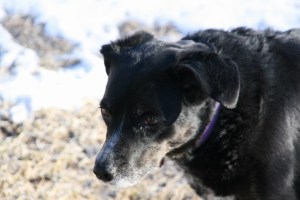 Was that? I think I heard something… Dammit, she’s got the camera again.

Shiloh’s sight started to fade step-by-step with her hearing about 8 months ago.  We’d noticed we were having to call for her a bit louder than before, and her confused looking about told us she could still hear our voices but was no longer able to discern the direction from which they came.  We then noticed her sight issues when she raced out the door after a neighborhood cottontail, only to “lose” it  when it darted a dozen feet from where she’d first spotted it.  She looked side-to-side, befuddled, but soon her attention refocused on something else, the forgotten rabbit bounding off lest she catch its scent once more.

Dogs are creatures of habit and Shiloh is no exception.  It won’t be much longer until I can no longer rearrange her kennel location or where her food bowls are located.  Furniture will need to be left in place until the inevitable end.

If you’ve never owned a dog, let alone any pet with whom you interact daily, you might not know the emotional struggle of which I write.  There is both joy and sadness as we approach the Autumn of Shiloh’s life.  Her morning hug, expected near daily from her as she waits for me to swing my leg over her and squeeze her between my lower legs and scratch her chest and chin, leaves me smiling and sends her on a romp through the room to her water bowl.  She dashes over to DH for a fur-tousling with the tail-wagging-diagonal-hop an elated canine is known to possess.  She then gallops to the back door to be let out for her morning constitution, skidding to a halt on the rug, looking outside and back to me in rapid repetition.  She’s soon back at the door for breakfast; where once we could simply said, “Okay”, we must now make eye contact with her as we loudly say the magic word in conjunction with a sweep of the arm towards her bowl.

A few years ago, Shiloh started to jump on the couch, after many years of not being allowed on the, then new, furniture.  The black hair and drool marks (not mine) gave her misbehavior away (we also know that her sister, RCA, had instigated this behavior).  Now, on her own all day since RCA’s passing two Thanksgivings ago, she jumps onto the couch before we have left the front porch.  Trips back to the house for forgotten what-nots are greeted with big, doe-eyed looks of guilt.  Once upon a time, we would have scolded her, but now we tell her, “Carry on”, and let her be.  We learned that she’d not stop, so our furniture is covered in blankets and towels, which are terribly fashionable, but it keeps the furniture clean… mostly.

Shiloh is my “Peanut”.  My “Peanut Butter Cup”.  My “Monkey”.  My “Pumpkin”. My “Good Girl” and “Me Hearty” (said like a pirate).  She’s the one I call when I need “Cleanup on Aisle One!”  She’s who I sneak the occasional tidbit of human food to when I know she shouldn’t have any.  She’s also my Senior Citizen and patient.

Like caring for an elderly relative, we’re more careful now.  No rough play and brushing her more gently as she’s no longer able to take the aggressive brushing or rub downs she once craved.  Lipomas and skin tags are creeping in more frequently and her eyes are now cloudy though still cataract-free.  We still spend as much time with her, but she’s more anxious now, beginning to whine moments after the direct attention is gone.

The other night I was putting clothes away and she walked into the bedroom to find me, peeking into the closet.  I happened to be behind her, no more than six feet, and called her name.  She cocked her head and took a step into the closet, lifting her nose to sniff the air.  She knew I was near and I called her name again.  Once more she looked in the closet but not finding me, she whined and turned to leave the room.  I took a step towards her and said her name yet once more.  She paused, but didn’t turn until I took another step, causing her to whine and sit on my feet, glad that she’d finally “found” me.

I can’t imagine what must be going through her mind.  We want to imagine that animals think like humans do, yet only apes seem to come close due to their ability to communicate at a higher level.  I think she gets confused and maybe a bit scared with the loss of her sight and hearing.  What she “knew” before is changing.  Her world isn’t the same any more and the only think we can do is be there to reassure her that it will all be okay. 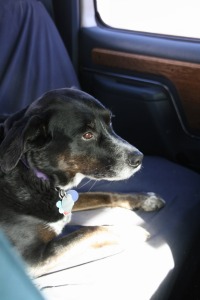 Relaxed on a ride in the truck.

Note:  I’ve had this written for over a week.  I didn’t want to sound morose and forlorn, but she’s my “Puddin’ Pop”; hopefully I conveyed the emotions I’m going through with an aging pet appropriately and fully.  I think it’s safe to say you can expect more.

6 Responses to Musings on… Older Dogs