If you had to change your name, what name would you choose?

Now, firstly, I think we should visit WHY I have to change my name in the first place…

Picture it (I sound like “Sophia” from the Golden Girls)… Madison, 2o12. 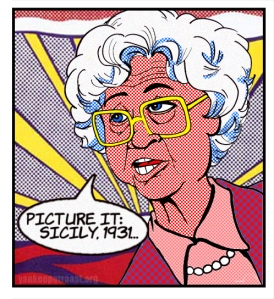 Anyway… I was innocently parked at a stoplight, waiting to get myself moving on the Beltline, when suddenly I find my passenger window smashed in and skeevy-looking woman crawling in brandishing a knife and demanding that I drive her to the nearest bank.     before I know it, she reaches across and hits the lock on the driver’s side door, and in the back hop three more terrifyingly butch women.

“The nearest bank!?” I utter and my mind goes blank.  She sticks the point of the knife menacingly in my throat and tells me that if I don’t move “right now” that she’ll cut me where I sit.  I hit the gas and drive.

I remember that there is a bank at the next exit, and turn off the highway, hoping that someone near my at the light has called the police to end this whole thing soon.  I look in my mirrors but don’t see anyone trailing.  Disheartened I pull into the bank parking lot.

The leader of this group of fiends presses the blade to my neck again, telling me if I move before she tells me to, she’ll kill me.  Visions of my friends, family and DH fill my mind and I fight back the tears.  I’m getting angry, but that’s a big knife right at my throat.

The accomplices come running out of the bank, screaming at me to drive and I put the car in reverse and head back out to the highway….

… I was tired, it was late, my phone had rung but this mad woman had tossed it out of the window of the car.  That bitch.  I had good pictures on there.

For some crazy reason the police hadn’t caught up yet and I wanted them to catch us.  We were heading to Canada on the North Shore Highway.  I’d been driving for 7 hours.  I got them to stop for gas once, but they wouldn’t even let me pee.  I hate them.

We were about to cross the border into Thunder Bay when the RCMP stopped us.

CRAP! They have cannon?! Do you KNOW what kind of damage that’ll do to my car?

Apparently they’d received the APB.  I felt a knife in my side coming from the back.  I didn’t dare move.  They asked me for my name and I knew I was screwed… if I gave my real name these maniacal women would know it…. and so, I said:

My name is… Brandy Glitterpants!

And then all hell broke loose.  There was something about showing ID, the crazy bank robbing bitches jumped out, I didn’t move… you know, the RCMP was standing right there.  The other women were caught… I got my story told and straightened out – though they did strip and body cavity search me; at least they used lube.  I was released and got to go home.

…I miss my phone.