Hello Dear Readers and Happy Sunday to you!

I hope that this blog post finds you hale and hearty and not all shriveled and wilty due to the heat like the trees here on the homestead.  This week has been busy with work-related things, but overall nothing too exciting has happened – the heat has had us all trying to stay low-key.

I worked this week as an “office ninja” and then as a “saucy babe”.  Saturday I had off from both jobs and DH and I headed into Madison to run some errands, had lunch, got some ice cream and then came back home where I stayed out of the 97 degree heat and scanned photos and drank some wine.

My major accomplishment for the week was moving my myriad of bird feeders from the front porch to a bunch of shepherd’s hooks in the prairie.  This will hopefully keep the Happy Chickens off of the porch (mostly) and cut down on the amount of bird poop that needs to get swept and scrubbed off.  The squirrels have also been thwarted a bit as they find they can climb the shepherds hooks but can’t let go to grab the feeders.  HOORAY!

Now that we have that out of the way… onto the Search Terms.

I’m going to forego listing the number one search (still all things “birthday”)… and we’re going to give the top search term award to:  who is the muse from musings of a muse.  Uh oh!  Someone is looking for me!  One.  Singular.  One person searched for that.  Who am I?  Why… I’m the Muse, that’s who.  Who are you?

Runner-Up for this weeks search term is:  wedgie boys tighty whities.  I don’t know how that search got you to my site… I laughed.  I shook my head.  I laughed again.  Then I went outside to move the hose around, came back and laughed again.

Random Fact #177 – I’m a flirt. Always. With almost anyone. Don’t flatter yourself. It doesn’t mean I want to have sex with you. (I had to steal this from a friend because she put it so eloquently)

Note – that says “almost anyone”… If someone tries to flirt with me and the flirting attraction isn’t mutual, then it’s just awkward.  Also realize that I’m socially awkward – I don’t always get that people are flirting with me – zoom, right over my head.

There is also a difference between flirting and all that which lies beyond.  I’ve been accused of flirting with (or trying to “steal” someone’s man) men who are attached in some form because I can carry on a conversation with them.  The ability to have a conversation does not flirting make, it just means you’re boring, Sweetie (or that you don’t pay attention to “your man” unless someone else does).

P.S. – This doesn’t make me a hussy, whore, slut or any other unseemly moniker you wish to bestow upon me… it makes me honest and it makes you an uptight, jealous ass.

Random Fact #178 – I was part instigator in ordering a college friend a catalog of chastity belts. (yes, this person is STILL a close friend)

Oh the fun we had… I tried to search out that catalog once again in the last couple years to order it again for that same friend.  Didn’t find it.  Too bad, because that would have been HILARIOUS!  (Yes… they would know exactly who put their name on that list.)

Oh Boba Fett… you’re so misunderstood.  Everyone just thinks your a heartless bounty hunter – but I know the truth. 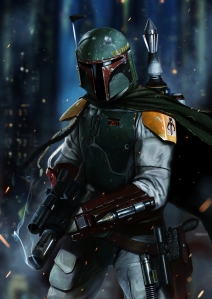 Random Fact #180 – I have the ability to speak with a lisp really, REALLY well.

I was able to pick up on accents fairly quickly when I started to travel and Wisconsin has at least three different accents alone (nasally Eastern [this is what I have], SW twang, Northern “Yooper”).  Amongst all those accents I was picking up affinity for, there was the lisp.  I’m immature.  I find it funny.  I can, have and will speak with one… and try to get a lot of S’s in what I’m saying.

Random Fact #181 – I developed a stress-induced stutter for a few months in college.

The stutter lasted a few months.  I got over it.  Wasn’t a big deal.

Random Fact #182 – I often can’t articulate my thoughts or feelings when put on the spot, but I could name an artist and song that could do it without thinking very hard.

There is a saying that if you can’t figure out what a woman is thinking, listen to the music she plays.  I think that holds true for some men as well.  The music I listen to changes with the mood I’m in, from mellow to intense.  Sad to happy.

Random Fact #183 – I am bothered by not being able to tell what gender a person is or wants to be.

This doesn’t affect Transvestites, cross-dressers or anyone else who tries to be the opposite of what they are.  I’m fine with that.  Androgyny in its complete form irks me.  Are you male or female?  Do I address you as Mr. or Ms.?  It has nothing to do with anything other than wanting to know how to refer to someone and to speak with them.