Conclusion of the Christmas Light Vandals

Look at the pretty lights!

I’ll begin this entry with a review.  DH and I had strung Christmas lights all along the fence for our yard, and twice I’d written about finding our lights cut.  We were frustrated.  The second time the lights were cut, we called the Sheriff’s Department to report the vandalism.  Days passed and we didn’t have any more tampering of the lights.

Christmas Eve was upon us, and we were off early to celebrate with the in-laws,  and then off to an Americanized traditional Swedish Christmas dinner with friends (we have a lot of Swedish friends).  DH and I had a full day of driving here and there and visiting, and because we were driving again the next day to visit my family, we decided to head home, pulling up to the house about 8:30 PM.  We slowly approached the mailbox and I scanned the fence in the headlights, commenting to DH that one of his repairs to the lights had come apart.  He didn’t see it, and backing up, we realized to our horror that the lights had been cut… again.

Our vandal didn’t stop at just one strand, no.  They cut each and every strand of lights running parallel to the road.  Exactly halfway in between each light.  I was angry.  Not exactly turning green and growing four times my normal size angry, but angry.  DH was frustrated, but we had just borrowed a trail or trap camera that day from a friend for this very purpose.  While I got on the phone with the Sheriff’s Department, DH went outside to assess the damage and to determine the best location for the trap camera.

It was beyond me why anyone in our neighborhood would keep coming around and cutting the Christmas lights.  Just what kind of Scrooge were we dealing with?  I kept asking, “Who cuts Christmas lights?”  Of course, asking this, I felt a little like Austin Powers when he asks, “Who throws a shoe?”

The Sheriff arrived and I watched the beams from DH and the Sheriff’s flashlights move back and forth along the fenceline from the warmth of the house.  They were out there quite a while, but I’d just be in the way if I went to join them.  The Sheriff was surprised at the trouble we were having and since this was the third time it’d happened, and he said that if the lights were cut again, they may come out with a surveillance truck and park it in the driveway.  Neato!

Now this was getting exciting!  Surveillance trucks watching over my house?  Hook me up!  The Sheriff and DH got the camera placed, and DH strung our last intact set of lights up on the fence.  He decided to change their timer from 6 hours past dusk to all night.  That’d deter those lousy vandals!

We went to sleep that night, fitfully.  Visions of neighborhood vagrants coming during the night, armed with wire cutters, cackling maniacally as they snipped between each bulb filled my head.  We woke the next morning, Christmas Day, and looked out at the lights.  They were still there.  We were awash with relief, packed ourselves up and hit the road for a long day of travel and visiting.

Our arrival home was met with the glow of the Christmas lights, the new string still intact and shining brightly.  We checked the card in the trap camera and nothing was revealed, so we waited some more.  Oh the looks on the faces of the vandals when we caught them red-handed!  I wanted them caught.  I wanted them caught BAD!

Monday morning, DH and I woke, saw our lights still hanging and decided we were having a bit of luck.  That was two nights that they’d made it through.  Our feelings were mixed as we had hoped to catch these vandals more quickly.  We went about our business for a couple of hours and then DH came into the house late morning and uttered, “THEY’VE been CUT!”

“What?!”  The lights had been fine two hours previous.  Oh!  Our vandals were BOLD!  Coming to the scene of the crime in broad daylight.  Devious!  Those Devils!  DH was angry.  SURELY the camera has caught them now!  He stomped out of the house to the camera, pulled the card and came to the laptop.  We looked at pictures.  We viewed video clips.  We… scratched our heads.  In one frame, the lights were fine.  In the next, they were cut.  The corresponding videos showed nothing.  Or did they?

We knew the camera worked.  It’d picked up DH while he was stringing lights.  It had picked up Crazy Dog as she ran about the yard.  It had even caught the Happy Chickens  as they made their way around the yard scratching up morsels.  SURELY it had caught our vandals.  We watched again.  And again.  And then…we saw the perpetrator.  A flash of fuzzy grey in the corner of the screen, running up the tree.

You guessed it.  Sciurus carolinensis, otherwise known as the Eastern Grey Squirrel.  Our  vandal.  DH draped the lights over the fence once more, moving the trap camera more in line with them and we waited, just to be sure.  A couple more days passed and we found the lights snipped once more, the camera revealing only another flash of fuzzy grey as the lights swung to the ground.  Now we were certain.

On New Years Day, we headed outside to put away Christmas decorations.  DH had already picked up the cut lights, so all that was left was the intact LEDs that remained.  I gathered up decorative balls from the trees and DH pulled the strings of lights, and with a laugh he yelled across the yard, “You’ll need to watch when you mow the lawn… I’ve found three buried Christmas lights so far along the fence.”

We packed away the last of it and headed to the house, shaking our heads and DH wondered aloud, “I have a feeling, years from now, we will be cutting down a tree and find a squirrel nest full of Christmas lights.”  Yes, yes we will.  So thank you little, furry vandals for making me call the Sheriff twice to report vandalism and a third time to say, “Oops, it was squirrels.”  I’ll take this as my cue to keep your feeders filled to the brim while the Christmas lights are blazing. 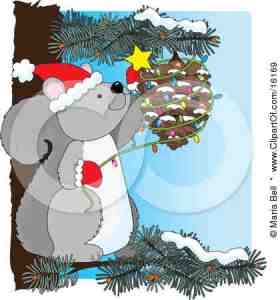 8 Responses to Conclusion of the Christmas Light Vandals