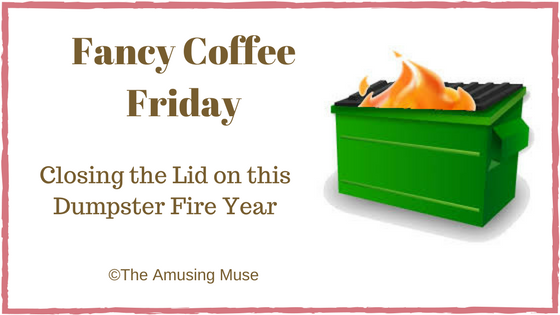 But, as 2017 draws to a close, and the fire in the dumpster of this year is running out of fuel while we can hear the 2018 dumpster being wheeled into place, I think it’s good to take a look at the past year and review the good, the bad, and the ugly. Let’s turn it on it’s head, though, shall we?

Politics. What a fucking train wreck. No, I’m not thrilled at having a Nazi in office, but, I’m not impressed with most other politicians either. There are very few I see out there “fighting the good fight”.

Pet Loss. Mr. Muse and I lost our last two “kids” this year. We’re officially empty-nesters. Does it matter that our “kids” were cats? Not at all. The house still feels weird not having the cats greet us at the door when we get home from work. And let’s face it – losing both kids equaled a whole mega-shit-ton of ugly crying.

Cardiac Unit. It’s been a long process of being diagnosed with a definite “you have this” heart issue, and I’m still not there. From the time I was 14 and started to declare that “something is wrong with my heart” and being told that it was all in my head to ten years later at age 24 being told, “Wow, you really DO have something wrong with your heart”, to this year where I was asking if I would be looking at a heart transplant in my future. Part of me really wants this to be in the “bad” category. It’s scary. Really scary. I had surgery, again, scary. But, there was good, too.

Cardiac Unit. June 9th I was told I should really have an ICD (implanted cardiac device) installed and a week later, June 16th, I was in surgery having “Cordelia” put in my chest. We’ve gotten along really well. I was told that the number one issue patients have is a mental rejection of the ICD, so I was determined to accept Cordelia as part of me and my life. There she is – and I’m not afraid to show off her scar. I even ask people if they want to touch her!

Road Trips. A week after surgery I was camping with friends in Minnesota and hiked over 15 miles. Three weeks post-surgery I was behind the wheel taking my Mom and eldest niblings on an epic road trip to visit family and see national parks. By the end, we’d traveled over 6,047 miles and accumulated stories like driving through the edge of a tornado in South Dakota, to seeing the wildfires in Big Sur, CA, to witnessing the aftermath of a massive fire in Elko, NV, to my niece dipping her feet in a bunch of lakes along the route, including Lake Tahoe. I’ve been asked if I would do it again, and now that I’m almost half a year removed from the trip? Yes. I would.

Cleaning The Social House. I solidified some friendships. I let go some acquaintanceships. I wanted to keep the people who kept the fires burning, but felt it was high time to cut ties with those who dumped a bucket of water on the flames. It’s good to do this with regularity. This doesn’t mean that the people who were let go were awful, but they weren’t stoking the fires for me. One person’s fire-stoker is another person’s wet blanket and vice versa. I wish them all well.

Less Booze. It’s taken a while. I’ve been working, mostly half-assed, at this for over a year. But, it occurred to me (again) that society has a HUGE problem with booze. Bad day? Have a drink. Good day? Celebrate with a drink. Worked the 9-5? Drink. Leaving work? Cocktails! Holiday party? Spike the punch! Worked out? Have a “shower beer”.

Between “mommy’s special juice box” in the fridge to buying “just one more round” after work, it astounds me that we’re all still scratching heads and asses over why there are so fucking many DUIs/OWIs/DWIs, etc. It’s because we’re practically mainlining booze into our systems! And, I realized I’m part of the problem. I am a generous going-outer. I have been the person buying another bottle for the table, the first, or another, round for the group. I know it’s because it’s the reality of society – the expectation. Doctor’s orders for no more than one adult beverage per day be damned! And then, I realized that I couldn’t ignore that advice. More than one adult beverage leaves me battling insomnia, aching joints, a rapid heart rate, dry mouth, and a nasty headache the next morning. So, I remind myself of these issues and most of the time it works. Sometimes it doesn’t – and then, when I’m paying for my pigheadedness, I remind myself again.

More Reading. This year I’d set a goal for myself to read more. Some books I’d been working on for years to try and finish. I got one of those monsters completed, and I’m in the “less than 20% left” on another (finally)! But, realizing that my new job this year came with a longer commute, which also meant less time to relax at home and read, I had to come up with another solution. Enter audio books. They are GREAT! I get them through the library system – for free! (Sorry, Audible and your $15/month subscription fee…. I see you but I ain’t buying.) I’m hoping to hit 25 books completed for the year, and who cares if more than half of those are audio book format. Humans evolved with oral storytelling and our brains like oral stories. Audio books for the win!

So, there we have it. The Good, the Bad, and the Ugly from this dumpster fire of a year.

What are your highlights you’d like to crow about from this year?

The lowlights to lament?

What would you like to toss into the dumpster to burn up as the year closes just to be done with it?

The Amusing Muse is a writer, blogger, and grower of orchids who lives in Southern Wisconsin with her husband of 18 years, a tank of freshwater fish, five goats, 25 chickens, and thousands of honeybees. Thankfully, the goats, chickens and honeybees do not live inside the house. She also has a mild pen addiction and recently purchased a rainbow pack of Inkjoy Gel Pens; they are beautiful.

Deep thinker whose mind operates at warped speed. Philosopher pondering the big (and little) things in life. Storyteller. Office Ninja. Model. Teller of bad jokes. User of big words.
View all posts by The Amusing Muse →
This entry was posted in Fancy Coffee Friday and tagged 2017 Dumpster Fire, Fancy Coffee Friday, musings of the amusing muse, the amusing muse, The Good The Bad The Ugly. Bookmark the permalink.