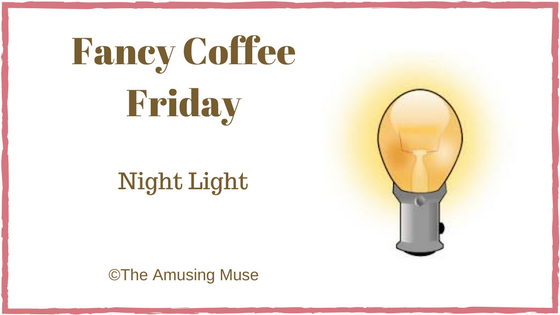 The alarm had gone off and with a swipe of my finger I was plunged into relative silence again. I rolled onto my back, pulled the covers up to my chin, and looked out the large picture window on the opposite side of the room. Stars and planets twinkled in the dark of morning.

As children, we are often brought up with a fear of the dark. We’re told scary stories about what happens to people in the dark of night. We’re given nightlights to shine as mini beacons of safety throughout our rooms and hallways. And that’s just INSIDE our homes.

If we haven’t been permanently damaged by tall tales of tragedy and still dare to venture outside of our houses, we have campfire ghost stories. Volcanic marshmallows and smoking wieners on sticks only slightly soften the blow to our psyches as the flames paint the faces of our familiars in strange shadows. Afterwards, we tiptoe to tents with flashlights, headlamps, and lanterns where we crawl into our sleeping bags only to try and out-scare our roommates with more frightful folklore as we try to ignore the fact that we have to pee but we’re too scared to leave the safety of the encampment to alleviate our discomfort.

As adults, we have the news. That’s plenty scary enough with wordsmiths who craft the crime beat from near and far into Bogeymen who lurk around every corner. To protect ourselves we get bigger nightlights for the outsides of our homes, some that flash to life whenever something moves in front of it.

The dark, we have been taught, is full of terrifying things.

Much of this fear is, of course, instinctual. Early man had much to fear of the night as large predators stalked for prey and early humans and humanoids were on the menu. Large insects and arachnids sporting poisonous bites often came out at night and a hapless human could die from a run-in with one of these creatures or find themselves living through a painful recovery.

But, in modern times, we have slaughtered a good deal of the large predators which would do us harm and have decent footwear to protect us from insects and arachnids out for a midnight meal. However, we’re not free of verbal spin doctors.

Are we stuck in a perpetual state of fear? Do we have to be?

The moon was full this last week and as I stood in the backyard, admiring the sparkle of frost on the blades of grass in the moonglow, I heard the cries of a rabbit being taken by a predator. Scanning the field behind the house in the direction of the screams, I hoped to be able to spot this scene of life which was taking place. But, I was out of luck. And chances are that the rabbit was taken by one of the handful of local Great Horned Owls.

When we are afraid of the dark, we miss out on the beauty that comes with it because we’re focused on the remote dangers. In the darkest moments before dawn, as I walked to the barn for morning chores, I looked over the ridge of the barn roof to the West and saw Orion’s belt. Betelgeuse twinkled red on Orion’s shoulder while Sirius and Procyon glinted brightly to the left. To the Southeast, Jupiter, Venus, and Mars shined in a row.

On good nights, and some dawns, I can stand in the backyard and hear the Great Horned Owls calling in the area. We’ve been here eleven years now and each year I anticipate the calls of these silent rulers of the night. Some nights we’re lucky enough to have them perch in a tall, dead oak tree dozens of feet from our bedroom and we stand in the dark at the window, watching in delight.

As the snow begins to fall and accumulate, bright nights offer a new perspective on the surrounding world. Coyote and fox can sometimes be spotted in the adjacent field, sniffing out rodents. If a breeze comes, drifts of sparkling snow flutter about like glitter. In the quiet, if you choose to listen, you can hear the trees “talk”, groaning, popping, clicking, crying as the cold causes their sap to move lower and their seemingly brittle bodies sway.

Warmer weather returns and with it brings the arrival of the bats, night moths, and lightning bugs. The trees still talk but now they are joined by woodcocks and whippoorwills. Being silent offers the opportunity to listen to what is going on in the dark and experience a world with which we are unfamiliar.

But, the surrounding towns and villages are getting brighter. The nighttime glow in the sky over each village, city, and town was brighter this year. More development, more lights. More lights, less twinkling stars to see.

Instead of learning to see in the dark, we have elected to fear it, to “set it on fire” with lights, to hope that we can chase away Bogeyman by keeping the lights on like Motel 6.

We’re cheating ourselves by driving away darkness with lights and we’re robbing nature.

All living things need time in the dark, true dark. Darkness offers a new way to see the world. It gives the chance for a short renewal.

It was cold last night as I fed the goats and chickens. Our dusting of snow from the night before had melted in most of the yard, but there were still pockets of it in typically shady spots. The night, however, was clear, and standing between the house and barn, I stood still to listen and to look up at the night sky and the stars. Cassiopeia was nearly overhead and the dippers were farther north. A plane’s lights flashed to the East. A satellite twinkled as it moved far above.

I was reminded of my younger years, grabbing my snow tube and heading to the front yard, bundled and warm in my winter clothes to lie in comfort on my back and star gaze. The magic of spotting satellites and getting a glimpse of meteors in a shower. On good nights, the Aurora Borealis shone. There were freezing cold nights when Mom woke us kids to wrap ourselves in afghans and stand between the vehicles in the driveway to block the wind and watch the Northern Lights shoot and pulse across the sky. One night there was even a large red patch that wavered gently for a few minutes before it disappeared.

And perhaps that is the magic of the dark, so many are taught to fear it that those who venture out into it get to see the world so many others do not. We know the sparkle of snow in the moonlight. We know the scent of night-blooming flowers and the sound of the wings of the moths who visit them. We hear the clicks of bats performing acrobatics as they hunt insects in the sultry summer air.

Turn the lights off… I want to see in the dark.

The Amusing Muse is a writer, blogger, and owner of an at-least-24-years-old catfish. She and her husband live in Southern Wisconsin, where she frequently comments on all the nighttime light pollution but is glad she can still see quite a few stars feet from her house. She also received her first garden catalog this week, which made her squeak with delight.