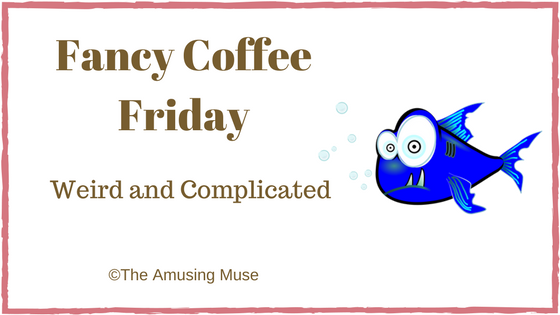 Maybe the Houlihan’s at the hotel wasn’t the most appropriate location to have a conversation about family relationships. Then again, perhaps it was the best place. Whether it was or wasn’t, it was where we were when the subject came up, and I described family relationships to the niece and nephew as, “weird and complicated.”

Children are not dumb. They also aren’t blind. They see things going on within a family’s dynamics, and while they may not understand all that is happening around them, they can form their own ideas and opinions.

So, there we were having placed our orders for dinner and were discussing a pending visit with Mom Muse’s sister who she hadn’t seen in person in over two decades. As the discussion turned to the why’s and how’s of this decades-long distance, I told the kids that as they get older they will learn that relationships, family relationships, in particular, get to be weird and complicated.

The kids both look puzzled and thoughtful as they absorbed this new idea. Mom Muse agreed on my description, and we went on to elaborate on the reasons why people in the family felt the way they did about others. How some will form their own thoughts and ideas about a situation without actually knowing, or even understanding, the truth of the matter.

My niece looked at me and said, “Mom always said you didn’t get along with her.” She looked worried and hurt. I sighed and smiled. I looked at Mom Muse, who sighed and smiled back. We both said, “weird and complicated.” We took turns explaining to the kids things that had happened with their mom over the years. Some of the topics left one or the other speechless, and others had them asking more questions.

There were some awkward moments to talk about; on the one hand, knowing the truth is probably better than not (usually, but not always), but does revealing that truth threaten the mental image someone has of another? Now that I’ve had time to ponder on the discussion of that night, I think that the kids have a better understanding of what was going on in their young lives. They learned we all had our thoughts and ideas based on our vantage points. They also learned that you can still love someone but heartily disagree with them and decisions they make, too.

Later, while visiting with my Aunt, she and I got to talking about her long absence as she prepared dinner. While Mom Muse had hinted at some of the reasons in conversation with me, hearing them from my Aunt in her own words was better. It was the truth, her truth, and it made her hiatus understandable. But, part of me was saddened to reflect upon all of the speculation of others as to why she stayed away as long as she had. Rather than ask directly, they formed their own conclusions and perpetuated myths. In other words, what was already “weird and complicated” was made more so.

I told my Aunt how we described family relationships to the kids. She paused, laughed, and said it was fitting.

And perhaps that makes things a little easier, calling them out for what they are, even if they are weird and complicated.

The Amusing Muse is a writer, model, and office ninja from Southern Wisconsin. On her recent road trip, she wore out a favorite pair of flannel lounge pants after years of use and washing. Then she found a pair of “almost” sweat pants… She doesn’t miss the flannel lounge pants quite as much as she thought.

Deep thinker whose mind operates at warped speed. Philosopher pondering the big (and little) things in life. Storyteller. Office Ninja. Model. Teller of bad jokes. User of big words.
View all posts by The Amusing Muse →
This entry was posted in Fancy Coffee Friday, Personal and tagged family, family relationships, it's complicated, musings of the amusing muse, the amusing muse, weird and complicated. Bookmark the permalink.