Last Monday morning as I drove into work, I saw a text come in from Mr. Muse warning me about an accident at a major intersection I usually drive through. “You may end up needing to go a different route.” As I came around a curve on the road, miles from the intersection, I could see traffic already backing up on the main artery, and with a split-second decision, I was headed south on a back road.

I grew up without GPS. We had big, unwieldy paper maps that became torn at the fold lines. If someone asked for directions, half of the instructions you gave were road names, and the other half were landmarks. “Sunday drives” were common. Day-trips with my Mom, ‘Nother Mom, and all of us children combined were common without any final destination. Rather, they were a meandering joy ride of them asking where we should turn next and us kids saying, “Here!” or “At the next stop sign!”

High school was another time and place where I was frequently the chauffeur to my friends on rides through the booming metropolis of Green Bay, WI. These trips were requested because as we’d ride through the streets just to see what was to be seen, I would run the show like a tour guide, pointing out featured buildings with witty commentary. At least I hope it was witty; everyone kept requesting these tours. But, I digress…

In college, the drives continued, over hills and through valleys of Wisconsin’s picturesque and pastoral Driftless Region, into Northeastern Iowa and down into Northwestern Illinois. I have photos, actual photos on paper that I had to pick up at a photo shop, of stops along roads that had nifty features we had to stop and see. One of those, early in my days of dating Mr. Muse, was along a road in NW Illinois in a small town whose name I’ve forgotten. I’ve tried to find the exact location again in my trusty Gazetteer (I have a small collection), but still, it eludes me. We had to stop because of a small, stone railway bridge over a country road, or county highway, that was made to accommodate the stream running next to the road. For someone with more skill – the photo would have been stunning. For me, it was a snapshot in time of a thinner self, on a sunny day, having a great time with this handsome fella who wanted to be around me.

In all of those times, maps were available but seldom used. My Mom and ‘Nother Mom grew up in the Green Bay area and they knew so many roads from previous trips, maps seemed silly. By the time High School rolled around, I knew which areas of Green Bay to avoid and for the most part, knew my way around the city. In college, though it was an area new to me, the very practical Mr. Muse made sure I knew to look at the sun in the sky to see which way was South if we got turned around, and with that fixed in mind, it was easy enough just to drive until we got to another major thoroughfare to find our way back to our start.

All of that navigation by the seat-of-my-pants was a helpful skill to learn. And, on Monday morning, as I whizzed along this winding, hilly, tree-lined road that I’d been on a handful of times before and knew “roughly” where I’d come out, and where my cell data doesn’t work (so no Google Maps or Navigation), I started to think about how I’ve felt lost these last few months of job searching. I don’t have a map for this; not even one tucked into the door of the car as a back-up in case I get really turned around.

Now that I’m older, I can see the value of having a map for when you get lost. But, if you don’t really have a final destination in mind, does having a map (or not) really matter? There is no timeline. There is no definite route. In all of my 41 years, there were very few moments of being scared that I was hopelessly lost. And yet, even in those moments, once that initial feeling of panic and helplessness was brought under control, I knew that I just had to drive until I came to another road. I would make it somewhere, and wherever that was, there I would find myself. 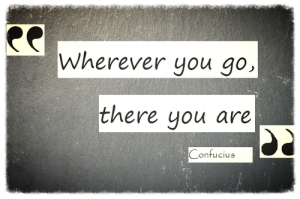 Recent changes in my life may have had me feeling hopelessly lost, but I think I’ve gotten control of the anxiety and panic. I don’t know my final destination, but I know that if I just keep driving, I’ll run into another road, come to another intersection, roll into another small town, and there I will have found myself, which is what happened on Monday.

I came out at the location that I thought I would and moved out onto the secondary arteries of traffic. In the distance, I could see the main highway, still deserted due to traffic being backed up at that accident. I said a little thank you that Mr. Muse came upon the wreck after it happened, and not during. I thanked my Mom for all those road trips and not depending on a road map. And, I stopped at my favorite coffee shop, and I got myself a fancy coffee to celebrate successfully navigating the backroads, avoiding the wreckage, and becoming a bit more at ease without having a map in my hand.

Now, a plug for a friend’s Kickstarter. I have known this wonderful photographer and dinner companion, Jack Gescheidt, who would like to publish his book “We Are Trees,” for his Tree Spirit Project. Jack’s passionate about trees and making sure some of our planet’s most beautiful trees are around to be enjoyed for generations. I’ve backed the project, and I hope you do, too. Please check out the project here at Kickstarter.

The Amusing Muse is a map collector, lover of road trips without a final destination, and writer living in Southern Wisconsin. She’s enjoying the explosion of daffodils blooming in her gardens, anticipating the tulips that will come along next, and getting ready to install her new package of 10,000 honeybees this weekend into their new home.