A Rantling on…. Needy People.

Do you know an emotionally needy person?  Are you an emotionally needy person?  I’m not talking about those folks who get in a funk during the fall and winter months – they don’t complain much.  I’m talking about the people who constantly whine/bitch/complain about their “First World Problems”.  If you know one or are one, what can you do to stop them or yourself from sucking the life out of you or everyone around them/you?

I wish I knew.

I’ve been pondering of late if it was the internet that seemed to perpetuate what appears to be a rampant increase in neediness.  Person after person spilling their guts about how horrible their day is going, and every comment in response receiving in turn another forlorn, woe-is-me, my-life-sucks moan.  The thing is, these life-and-emotion-sucking-vampires have always been around.  The internet only gave them another platform with which to declare just how awful their life is to anyone they could trap into listening.

Vampires the likes of these don’t adhere to the “Vampire Code of Ethics“; such as number five, “Never attack another immortal without major provocation”.  Emotional vampires don’t need any provocation.  You’re another human being, and humans are supposed to be sympathetic to other humans woes, apparently this lack of immortality is all the  provocation that is needed. To that I say, “SONOFABITCH!”

I need this button.

Here’s the thing, no matter what I write in response or about Emotional Vampirism… I’m going to come off as being “The Bad Guy/Girl”.  The Douchebag.  The Insensitive Asshole.  Confession – it wouldn’t be the first time I was called those or similar.

Emotional Vampires can suck the life out of another person in mere moments of interaction.  A few words with them are the Black Holes of conversation.  These are the people who you avoid conversation with whenever possible because you loathe entering that dreaded Black Hole, yet they seem to sneak into your life in the most innocuous ways and… you’re good and stuck. Fuck.

You can try to avoid conversations with these folks, but somewhere (like when you’re in a bathroom stall…trapped), somehow, they’ll track you down and drag you into their mess; and these people ARE a mess.  Everything is wrong.  Even if something happens to go right in their life, the rest of it is a horrible, gaping, maw of a black hole out of which they can’t drag themselves.  They look to everyone else to toss them a rope before they are dragged into the abyss.

We who stand outside the black hole, holding the rope with both hands are often left wondering what we did to deserve this ill-treatment.  Time and time again we’ve been shown that no matter what we do or say, there is no hope of trying to rescue this emotional vampire from where they are headed.  So, after a time (how many times just depends on the vampire on the end of the rope), we let go of the rope, give a wave and give a perfunctory, “Good luck”.

We tried.  We failed.  We tried and failed again. And again.

Sorry, Emotional Vampires, your drab-colored view of the world is fucking depressing. 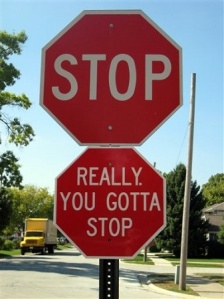 I, that’s right, the Insensitive Asshole, proffer to you some advice:

And lastly – I leave all of you Emotional Vampires with some words of wisdom from Voltaire:

Being an Emotional Vampire is bad for your health.

10 Responses to A Rantling on…. Needy People.