Baling hay is good for the soul

Did you ever notice that there are a lot of things that are good for your soul?  Chicken soup.  Dogs.  Horses.  Laughter.  The list keeps going, and well, I’m adding one more to the list:  baling hay.

I grew up on a hobby farm with livestock, and livestock need to eat, so there was work involved with that, baling hay.  Because the farm was a “hobby farm”, we didn’t have our own baling equipment (swatter or mower, tractor, baler, wagons, etc) we had to “farm” that out with neighbors or relatives who did have equipment.  Two or three times a year, the hay would be cut, the scent of freshly cut grass and alfalfa filled the air, and to this day is one of my favorite smells.  We’re at the time of the year when we’d be haying, and it brings back great memories.

The first cutting of the year, first crop, was always the heaviest and produced the most hay.  We often cut first crop around the 4th of July holiday; by then the neighbors or relatives had finished their own baling (which we helped bring in) and the songbirds had finished raising their first offspring of the year (many songbirds raise their young in the fields).  The weeks leading up to the cutting found me wandering through the hay field, exploring, sometimes with a camera in hand, but often it was just me and the dog, the timothy grass over my head, the alfalfa chest-high.  I’d breathe in the sweet scent of the blue and purple alfalfa flowers, find myself some red clover to munch on (the flowers are edible and very sweet, as are the soft, white parts of timothy grass) and often I’d find myself a soft spot in the field and lay back, stretch out and watch the clouds pass overhead and “just be”.

The field was a favorite place of mine.  I rode my ponies and later, my horses, among the grasses and legumes.  I hunted butterflies there.  I watched the world, the birds, the clouds, insects.  The field was a safe haven; and when I was a lot shorter than I am now, it was a fortress of imagination and escape.  The field also was the major food source for my pets and for the animals that sustained me, so I learned to treat it with respect.

Baling season also was the time of year when I got to spend time with relatives, young and old, distant and not-so-distant, working hard for a common goal.  My Great Uncle and Aunt’s dairy farm was abuzz with their neighbors and my cousins, tractors in and out of the yard and load after load of hay being brought up to the mow to be stacked at what seemed to be skyscraper-heights.  The work was hard, dusty, dirty and at the end of the day (or the wee hours of the morning) when we got home and took a shower… there was hay chaff in places you didn’t know hay chaff could lodge itself.  Yet, there it was and every year it was a surprise. 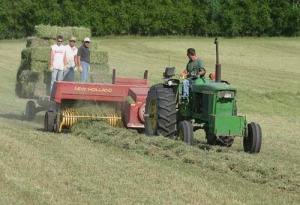 My first job baling was “helping” guide the bales down the slide from the wagon to the elevator.  When I had the hang of that job, and knew to keep my feet out of the way of the chain drive on the elevator (and keep my fingers out of there, too), I was promoted to guiding the bales all by myself, and then I’d rotate in on emptying the wagon with the rest of the younger cousins and my Great Aunt and Mom.  The menfolk up in the mow had a harder job; the air didn’t move much on top of the bales and the higher they stacked the hotter the air got, but everyone worked hard to get the job done.

The weather reports were listened to intently and threats of rain were serious business.  There were days where we were baling and stacking hay until midnight in a mad rush to get the hay off of the field before the rain moved in the next day.  In spite of all this hard work, I don’t recall complaining, because the joking and teasing between everyone (where I learned a lot of my sarcasm and sassy behavior) made the work “easy” and we were fed well by my Great Aunt.  Lunch and dinner was always hearty and meals always tasted so much better, you also appreciated them more, after spending ten hours or more torching calories in the heat (and often humidity) of summer.

The dining room was the garage, a large screen placed across the doorway; the banquet tables were set up with folding chairs and a smorgasbord of hearty casseroles, salads, bread and butter, vegetables and homemade pickles was set out.  Fresh milk from the bulk tank and lemonade on ice stood in pitchers and the adults had Hamm’s beer in hand.

The workers marched into the house to scrub off as much of the dirt before we ate, because that’s what my Great Aunt wanted, and once we were scrubbed up we took our seats around the table.  I always sat next to my Great Uncle, who always got the meringue from my Lemon Meringue pie (I still don’t care for meringue) if that was served for dessert.  He teased me all the time and called me “Sadie” instead of Sarah, and I loved him for it because I knew it was his way of showing he cared – and I love him and my Aunt dearly to this day.

I loved spending time on their farm.  The teasing from the workers, relations or otherwise, the relief that a breeze on a hot day offered as the sweat ran down our skin in rivulets through the dust and chaff, it was all worth it at the end of the day.  The job always got done, even if we had to bust ass into the wee hours of the morning to do it, and the memories I have are worth every ounce of sweat and muscle ache that came with the hard work.

My Great Aunt and Uncle have since sold their farm to one of their sons, who now bales the hay in big, round bales.  The hay field at my parents still exists but I’m too far away for baling most of the time and can’t make it up to help.  I miss the work and the camaraderie and the intense satisfaction that comes from getting the job done, but when I see a field being cut or has been cut, I roll down the windows of the car as I pass and inhale deeply and smile.

*Author’s note… From Mom: “I found tears rolling down my cheeks as I read this. I know 2 Octogenarians who would love to read this! One of my best memories is when Auntie said “We love it when you guys come to help cause the boys are so busy teasing you that they forget to fight with each other!” Guess that’s how it goes when you have 9 sons!! Loved this one.”  This post has earned the “Mom Seal of Approval”.

4 Responses to Baling hay is good for the soul