It occurred to me the other day whilst I drove about, that Santa’s wardrobe choice is quite questionable.  “How so,” you ask.  Well, if we look back through history, we see some other wardrobe choices that have caused us all to ponder in head-scratching-wonderment at just what it was, exactly, that caused a person to don their outfit.  Bad wardrobe choices still occur, if they didn’t, we wouldn’t have People of Walmart and Brittany Spears getting out of limousines sans undies.  So, that said, let’s take a look at some questionable outfit choices. 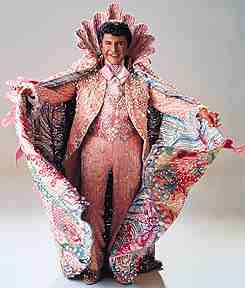 Rhinestone much? Now where did I leave that Bedazzler?

You know it.  I know it.  So tell me how it is that Liberace had become this huge sex symbol?  My non-flamboyant-self, who likes to wear black (or brown or gray, argyle socks excepted) and hide in dark corners when I’m not modeling, is amazed that women were blinded to the fact that Liberace batted for the same team.  Maybe they just couldn’t see it for being blinded by all of those rhinestones? 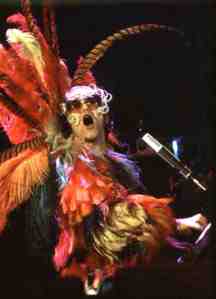 I heard that feathers are in this season...

Rhinestones, silly glasses and hats.  I love you, Sir Elton John, a man after my own heart (well, the part of me I keep locked up from society) but, I am aware that I could never give you the kind of love you need.  Women still throw themselves (and their undies) at you in defiance of your admitted lifestyle. 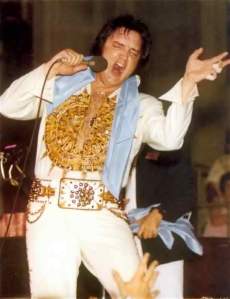 I’m going out on a limb here, and I’m sure I’ll get hate mail, but really?  A rhinestone-encrusted jumpsuit?  Go ON with your fat-self, Elvis, and please don’t subject the rest of the world to your Moose Knuckle!  I am amazed when I go to Las Vegas, just how many middle-aged fat men are willing to run around in the same cringe-inducing outfit.  We’ve seen where Liberace and Sir Elton John’s wardrobe choices have led them.  Of course, we also realize that Elvis is not dead, he just went home. 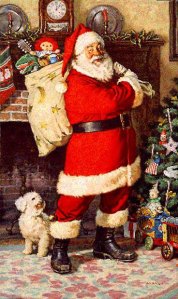 You’re on Fat ‘n Jolly!  You parade around the world wearing a red, velvet suit trimmed with white fur and black, patent-leather knee-boots.  If I have learned anything from the aforementioned participants, it’s that you can’t judge a book by its cover, or can you?  I’m ONTO YOU!