How much of a Star Wars nerd AM I?! 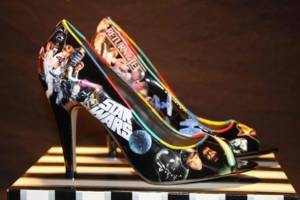 Is it bad that I want these?

So, it occurred to me to ask myself how much of a Star Wars nerd I am because…. Number one… a friend on Facebook asked when “Episode IV: A New Hope” was put to the title of the first released movie (released in 1977).  This caused me to wonder WHY I didn’t know this, and the fact that my brain is full of facts, useful only during games of Trivial Pursuit or Trivial Pursuit for Dummies (no one likes to play me on that…. cause I win all the time.  What does this tell you?), but yet, my brain did NOT have this fact filed away for use.  So, I looked it up on Wookieepedia (yes, there IS such a thing!) and discovered that after the release of the second movie, “Empire Strikes Back”, there was a re-release of the first film, which is technically the fourth film, and they added “Episode IV:  A New Hope“, in 1981.

So… then I pondered a bit on my adoration of all things Star Wars.  I dated a guy in college (if he reads this, maybe he’ll blush), and at Halloween one year, he dressed up as Boba Fett.  Let me tell you… Boba Fett has birthed fantastical fantasies the galaxy over.  “No, No…. leave the helmet ON!”  What makes Boba Fett even MORE of a much-swooned-over character, being a clone be damned, is that in the books that came out within the last 15 years, he’s a softy at heart.  Don’t believe me?  Read the books.  “Tales of the  Bounty Hunters“.  So, Boba Fett is not only dangerous… but he’s got a big, squishy heart.  Swoon!

My obsession doesn’t stop at Boba Fett alone.  No, no, Micro Machines (remember those?), books, posters, puzzles… I even have bins of toys from the re-release in the 1990’s still in their boxes.  Oh yes!  (There is even a Tattoo Fun Barbie in there – yes, in the box.)

And then today, I come across another blog, Listful Thinking, which has had me IN TEARS from laughing this evening… (Thanks, hun… you made my mascara run!) and low-and-behold, she’s a Star Wars fan (nerd?)!!!! (uh oh, I think I broke her rule on exclamation points).  Thanks to her blog, I know what I want for Christmas.  Since a Podracer is a little out of the question, I would like to formally put in a request for the Darth Vader voice-changing Mask.  I could really use that for photo shoots…. I’m just sayin’, though DH says he’d rather I ask for Princess Leia’s metal bikini from Jabba’s Palace (I could use that for photo shoots, too!).