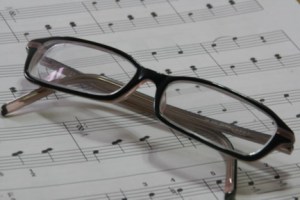 I have been wearing my specs, my glasses, my goggles, my eyewear since I was twelve.  Not that I WANTED to wear them.  You see… I played sports, namely soccer, and rode horses.  Glasses would just be in the way.  I remember sitting in class, squinting at the blackboard, and thinking to myself, “I think I need glasses and I don’t want to wear them. ”  Then my next thought was, “Glasses are expensive.”  They were expensive, and still are today, but I mustered up the courage to tell Mom I thought I needed to have my eyes checked because I was squinting and getting headaches.  Mom’s response was, and yes Mom… this WAS your response, “You don’t need glasses.  You just want them because I have to wear them.”

Now, before everyone gets all “up in Mom’s grill” over that.  She was only stating a valid concern over a child wanting to emulate a parent.  It was a possibility, but really… what rough-and-tumble, soccer-playing-heathen WANTS to wear glasses?  I just really wanted to be able to see and not have headaches anymore.  So, some time went by, the squinting and headaches continued as did my reminding Mom and Dad that I felt I should get checked out.  Eventually, I was brought in to see, Dr. Dufeck, at the eye clinic.  I liked Dr. Dufeck, though I was a bit creeped out by how close he had to get with those pieces of equipment to look into my eyes.

There I was, never-been-kissed-12-yr-old me, trapped in the chair behind the swing-arm holding the watchamjiggy apparatus they use to look DEEP into your eyeballs, and Dr. Dufeck was inches from my face.  AHHHHH!  I could feel his breath!  THAT was weird.  So, as I’m sitting there, trying to maintain composure, attempting to follow his instructions to “look at [his] ear” as he scanned my retina through the blue marble (at least they always look blue), I’m freaking out in my head about being able to feel his breath on my arm.  I have this “thing”, an issue if you will, with people being in my face.  I don’t like it.  I don’t like people IN my face or TOUCHING my face, unless it’s absolutely necessary.  For years I wouldn’t even let my own husband touch my nose; it’s this very Romanesque feature that while I don’t hate it – it does work after all – I tolerate its existence on my person.  This aversion to having people touch my nose probably comes from all the hits to the face I took between sports and horses…  But I digress.

Eye exam complete, it’s confirmed that I have need of spectacles.  So, I walk out to where they have all the frames, and choose a Lucite pair that has a blue top half, and pink bottom half.  Tres chic, no!?  I thought they were clever, and after a weeks wait while the lenses were made and installed, I got to put them on.  Holy cow!  I could see the blackboard!  Headaches be gone!  So, I learned to live with my glasses, and things went well until one 4-H Teen Winter Camp…  I think I was fourteen by then, and we were all getting into our bunks for the night.  I slid off my specs, carefully folded the earpieces in, which by now were getting fairly loose, and went to set my glasses on the nightstand.  Tragedy struck as I held them a bit too loosely and they fell.  One earpiece swung out as they hurtled towards the floor, and as I launched my hand after them to snag them before they hit ground zero, the earpiece caught on the mattress.  The horrifying *CRACK* of the earpiece breaking off, was followed by my utterance of, “Oh, NO!”  This scene plays out like that of Ralphie in “A Christmas Story” when he attempts to shoot his eye out with his Red Rider BB gun, knocks his glasses off and steps on them.  I don’t remember if I cried.  I know I felt like I wanted to.  Glasses were expensive (and this should foreshadow another posting on me and my guilt with “expensive” and why Mom thinks I’m the hardest person in the world to shop for).

I spent the rest of that Teen Winter Camp minus my glasses, squinting, getting a headache and then when it was time to get picked up and head home, I had to break the news to Mom.  I got a new pair of glasses.  They were ugly frames.  The ones I liked were too costly (ongoing theme in my life).  They worked though and did what frames were supposed to do – hold my lenses in so I could see.  Thus was my early relationship with wearing glasses.

Now, in my adult years, I find that I love my glasses.  Oh, I have contacts that I wear on occasion, mostly when I’m off snorkeling, or kayaking, or doing some other activity out-of-doors where glasses are just going to get in the way.  When I wear my contacts, I feel naked.  Odd to say, but it’s true.  They’re part of my identity now.  I somehow feel that people don’t know who I am if I’m not wearing them.  I think what it really comes down to is… I don’t know who I am without them, I don’t recognize myself.  Really!  I’ve seen pictures of myself without glasses on and ask who the person in the picture is.

I wear my glasses with their black and pink frames like an ID Badge of Honor.  They’re slightly Retro in look, and yet have these little pink stripes where the earpieces meet the lenses.  The inside is pink as well and when I wear them, the world is framed in this slightly rosy glow where everything is clear.  My rosy outlook on life could be attributed to the glasses, but I think it’s more of a personality thing…

So there it is.  My love of my spectacles.  My ID Badge.  My Identity.  My armor.  My rosy-outlook-of-the-world.  We’ve had a long and storied history, fraught with annoyance, anger, tragedy… and yet we keep coming back together.  Sometimes, about every two years, we return with a new outlook on the world, though this last time I couldn’t bear to give up my rosy view, and suffered a week of wearing contacts while I awaited my new prescription to be installed.

Despite all of their failings, like sliding down my nose when I sweat, of getting dirty and smeared and needing to be cleaned frequently, I love them.  They have just as many scars as I do, they’ve fallen to the ground, been picked up, dusted off and put back on.  They have character, and since I’m a character as well – they fit me.  I like being a bemused and bespectacled character.

5 Responses to Bemused and Bespectacled