The other day I was going through a stack of magazines and came across the Fall 2014 issue of Modern Farmer that I picked up as an impulse buy in the checkout of Willy Street Co-Op.  There is a picture of a Holstein cow on the cover and “HAVE A COW” in bold and black in the corner.  It was their “Pre-Apocalypse” issue and though I’ve written about preppers before here and here, and have have even been called a “prepper” by a coworker (goodness forfend!), I don’t consider myself a prepper.  (Like a Pepper… but less fizzy.  And not everyone wants to be one.)  I do, however, like to be prepared.  Y’all should see the amount of toilet paper and facial tissue I had stored up for the winter that we’re just now getting to the end of!

Back to the magazine.  Cows. 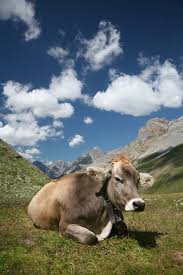 This is a Brown Swiss. In Switzerland.

Years ago as a child I loved going to my Great Uncle and Aunt’s dairy farm.  My childhood is filled with memories of baling hay, endless teasing by my older cousins, eating dinner at midnight on hot and sticky summer nights after working all day, strawberry pies, tater tot casserole and cows.  Brown Swiss cows in particular.

It didn’t matter that at my own house I had a pony, horses, goats, rabbits, cats and dogs; cows were a creature I didn’t have a ton of experience with outside of the annual steers we had kept for half a year only to end up in the freezer and be eaten come fall.  (I wasn’t really allowed to handle them as they were too fractious.)  The cows, they were different entirely, handled daily, the Brown Swiss tended to be docile creatures, unlike the uppity Holsteins that were beginning to make their appearance in the barn.

So, as I gazed at the magazine cover and then read the article, the memories that came into my head started with one summer day, heading out to the barn with the guys who were going to milk the cows and I wanted to “help”.  Of course, they let me “help” – which I’m sure meant that I was in the way, but I eagerly put out scoops of corn silage into the feeder in anticipation of the cows making their way into the barn soon.  I had to learn how to not scare the cows in my excited state of being allowed to close the stanchion, letting them put their head in and calmly shoving the mechanism together.  And once it was all done, and I couldn’t help any more, I ran the aisle of the barn with one of the ever-present St. Bernards on the farm or took up a prime viewing spot in front of a cow that seemed particularly patient and calm, No. 1.  As she licked her muzzle, the tip of her tongue reaching all the way up into one of her nostrils, then the other, I attempted to imitate her.  I failed, but I kept trying!

“No. 1” was surely just a reference to the particular stanchion and not the cow who happened to occupy it, but to me, my memory of her is something of an idolization of “her”.  But, does it matter?  Fond memories of childhood have a way of becoming larger than life.

One winter, as I frolicked out in the barn among the cows who were brought indoors against the frigid temps, I quietly sidled up next to No. 1 who was laying in her spot, placidly chewing her cud.  Gingerly I tip-toed up towards her head, well aware that this thousand-pound animal could easily crush me had she wanted to but I held my mittened hand out to her nose so she could sniff and before I knew it, I had pulled off my mittens and was running my fingers through her thick winter hair, pressing my cheek to her shoulder and absorbing the heat from her.

To my younger self, I was no more intrusive than the barn cats that were curling up to, or on, various cows in the barn.  And, No. 1?  She let me.  She stayed lying in the stall, calmly turning to watch me with an air of aloofness as I wriggled my fingers into her hair.  I’m sure I imagined that I was giving her a good massage – and perhaps I was?  All these years later, if I attend a county fair or the state fair, when I see a Brown Swiss, I want to walk up to it and bury my face into it’s neck, hugging it.

Mr. Muse has a chuckle each time we pass by a farm that raises the breed and I see the cows outside, excitedly announcing how many are out or if there is a particularly pretty one at that moment.   He’s also well aware that if we had more acreage – I’d probably show up with one for the farmstead – my love for the breed runs that deep.

But alas, I don’t, and so I watch for them on my commute and pet them at the fairs and remember what it was like over thirty years ago to bury my fingers into the winter coat of a calm cow and enjoy the sensation and the warmth of her and imagine she enjoyed herself too.  For me, Brown Swiss are the best cows there are.

Do you have an animal around which is centered a, or many, very fond childhood memory?