Apparently my post last week touched a nerve with some people regarding my preferred status as a non-hugger.  It’s cool.  It’s alright.  Like much in life, I can fake enjoying hugs as well as I show genuine enthusiasm for mariachi music while I dine at Mexican restaurants.  (Yes, I do dance in my seat in time with the music as I eat my gluten-free entree.  I can’t be the only person who does this.)  However, lest you, my Dear Reader, be led astray in thinking I’m completely antisocial, let me explain a little further. 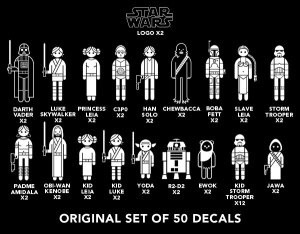 So many decals to choose from yet… always with the Luke and Leia.

I don’t dislike all people, quite a few, but not all.  In fact, I quite enjoy conversations that get beyond the weather (it’s getting colder), the Badgers or Packers (I don’t watch sports) or the latest “reality” show on TV (I barely watch TV and avoid “reality” TV like I do shopping at Walmart, i.e. I never shop at Walmart).  I’m one of those people who seem to attract every poor soul with a story and am pressed into service as Chief Listener (check out Lisa’s take on that same issue).  While I tend to avoid conversations about religion (I identify as Philosophical Taoist; also acceptable are Humanist or Atheist) and politics (they’re all crooks and I say we drive them off cliffs like lemmings and start over from scratch); I relish discussions about pretty much every other subject known to mankind.  Want to talk about organic versus conventional growing practices?  I’m your gal.  Will humans truly colonize the Moon or Mars?  Let’s discuss.  Why do STAR WARS fans with the “family” decals on their vehicles always pick Luke and Leia for the parents when they were brother and sister in the movies?  Together we can get to the bottom of this problem!

And so, the other morning I found myself reading an article about Matt Kuleza from Australia who decided to meet every one of his 1000+ Facebook friends for coffee and blog about it and I thought, “what a neat social experiment”.  I can’t even come close to comparing what is my obviously paltry 166 friends to his 1,088 (at the time of the article for the both of us), but as I prefer quality over quantity, I have whittled my list down to people I actually know, have met or have been talking to online for so long that I know them as well as Mr. Muse.  (In fact, that 166 people is still almost more than I can manage and some of them may find themselves Facebook dumped in the very near future.)  However, this doesn’t mean that I stop meeting new people.  In fact, today I’ll be getting together with a mutually-following Twitter person for lunch.  Since they and I have both put our “I hate small talk” cards on the table, I think we can skip right past the weather and get on with discussing Lionel Richie’s songs, singing career and life choices.  Darla over at She’s A Maineiac would approve.

Is anyone else skeeved out by this video as much as I am?  I really hope this is a professor/college co-ed and not High School teacher/student situation.

There have been other offers to meet people from chat rooms, Facebook and Twitter in person that didn’t pan out.  Admittedly, I have met people from online in the past and left thinking, “Wow – never doing that again,” after way too much over-share in the objects-up-the-rectum category (literally – the person brought out photos).  That said, I’m from the camp of “I don’t say what I don’t mean” and if I suggest, or someone suggests to me (and they aren’t creepy), meeting for coffee/lunch/after-work-cocktail, there will be follow-through.  “Put up or shut up” as the saying goes.  You want to meet, then let’s get it on the books.    Perhaps we’ll get to the bottom of the STAR WARS decal family conundrum?  But no matter what, if we ever meet, leave those hidden-object photos you’re dying to share at home.

Share Time: Divulge your most awkward or worst met-online-and-met-in-person story.*

*Bonus points if you met the same person with a penchant for objects-up-the-rectum photograph show ‘n tell.