The HILLS are alive, with zucchini!
Photo courtesy of: http://www.cleveland.com

When you start off in the spring with a garden, your eyes are bigger than your ambition (and your stomach) and even after years of experience sometimes too many of one thing gets planted and you begin to see the error of your ways.  In my current situation, I foresee a bumper crop of butternut squash in my future due to Mr. Muse being extra helpful and planting two more hills of it than I planned on; thankfully it stores well over the winter – it being a “winter squash” and all that jazz.

Summer squash, the most infamous of which is zucchini, is a different story.  I planned ahead.  I had the seeds.  I planted 8 seeds in one hill, thinned down to a respectable 3 plants for the hill and figured I would be safe from the Uber-bounty where I have to leave it sneak-attack-guerilla-style on neighbors doorsteps.  Last week I was able to collect a few “babies” from my “Mound ‘o Summer Squish” for grilling on the 4th of July.  There were a couple more fruits on the non-vine (I planted a “bush type” zucchini) that had grown to about eight inches in length but then rotted from the blossom end.  I cranked them off of the plant and threw them to the chickens, knowing that the many blossoms I saw would produce more. 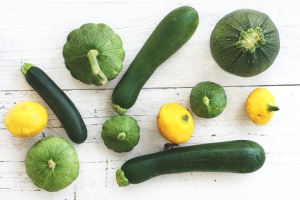 So many pretty zucchini!
Photo courtesy of: 5secondrule.typepad.com

Last Thursday, Mr. Muse had gone out to pick what has become our bumper crop of black raspberries (cultivated plants, not the wild “black caps”) and warned me that I would need to go out and pick at least one zucchini.  Two zucchini and ten pounds of it later, I had plenty of fresh zucchini to make “sticks” for munching as we were leaving for the weekend for camping up in Northern Wisconsin.

Once we arrived back home yesterday, he went back out to pick berries again (we’re up to four quarts now) and returned saying that magically, I had some more zucchini to pick.  I came back with two more the length of my forearm, about ten more pounds  worth as well as two large cucumbers. 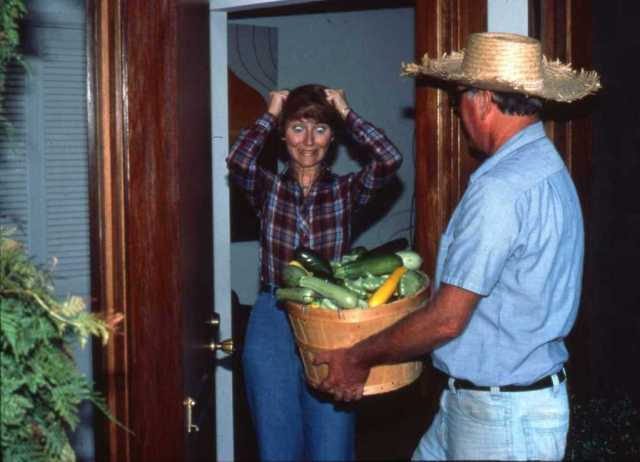 Currently, as I sit here at the island in the kitchen, typing away… I can feel them staring at me over the top of the laptop monitor.

There are more coming… at least one more tomorrow will be ready and at least five pounds in weight.

I think I better make some zucchini bread, muffins, sticks, scrambles and…

What is your favorite way to use zucchini?

2 Responses to Zucchini! It’s, what’s for dinner (and breakfast, lunch, snacks and desserts)