Recently, there has been SO MUCH uproar about Abercrombie & Fitch’s CEO Michael Jeffries’ response to why they don’t sell clothing larger than a size 10, that I was compelled to write about it.

First of all, let’s put the graphic up on the board. 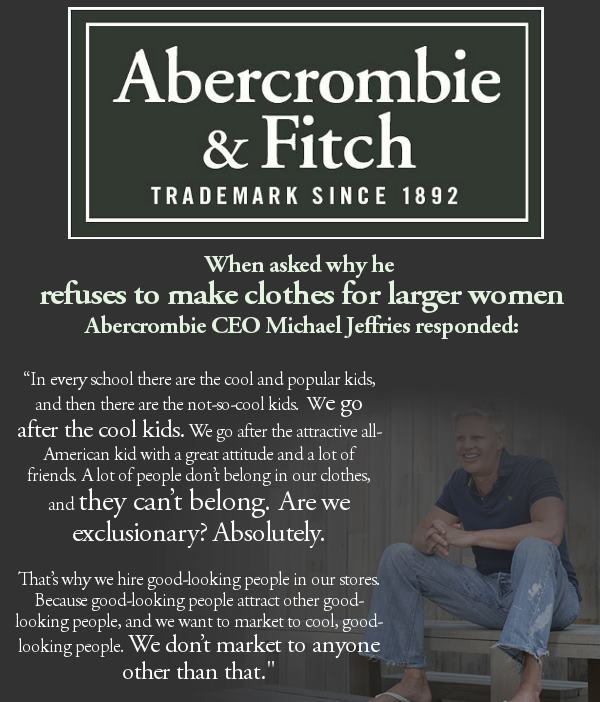 Source: The Book of Faces

All douchebaggery aside, the dude was giving an honest answer.  I can’t fault him for his honesty.  Do I think that what he said was appropriate?  I’m not sure.  I’m not sure, because he was being honest – and we need more of that in the world.  I do, however, feel he’s being short-sighted, but whatevs.

Here’s the deal.  I have never shopped at Abercrombie & Fitch.  Shopping there holds no interest for me.  I don’t like wearing t-shirts emblazoned with store logos plastered all over the front of them.  Those few times I was at a mall and approachied an A&F, the music was so blasted loud that I hurried past just to save my ears – and that is coming from ME, someone who gets told that I play my music so loud in my car that people hear me coming.  The difference is: I like my music and I don’t care for what they played in the store.

Let’s recap.  I don’t care for the clothing.  I don’t like their choice in music.  I just don’t care for their whole “culture” of a brand.  It’s not me.  I don’t care that the largest size they carry is a 10 and that’s what I wear.  Reading that quote doesn’t make my feelings change one way or another.  I am not infuriated to the point of boycotting the store.  Why?  Because I never shopped there in the first place.

Listen, I’m not gonna lie to you, I can get really worked up over environmental issues, women’s and equal rights issues, political issues…. but this whole Michael Jeffries’ thing is none of those.  It’s about people taking offence to a truthful, albeit jackass, response to a marketing strategy question.  Now, people who haven’t shopped at A&F before are jumping on the Boycott Bandwagon even though they never would have considered shopping at the stores in the first place.  It’s a delusion of entitlement.

People feel like they are entitled to go wherever and do whatever whenever they want.  Welcome to the Real World.  It doesn’t work like that and all y’all need to just get over yourselves.  There are more important bandwagons to jump on that actually do some good.

To Abercrombie & Fitch, live long and prosper.  You didn’t miss my business in the past, you won’t miss it in the future.  Your marketing strategy appears to be working and I’m not “your customer”.  You don’t want me.  I’m probably not hot enough and for all I know, your size 10 jeans run small, so I’ll be too big.  I’m also too old.  I’m guessing that I’m about 20 years older than your “average” customer.

Also, hooray for me!  I have developed the wisdom to not worry about clothing brands.

How about you?  Are you outraged over this remark?  Were you a customer, but have now changed your mind?  Were you never a customer before but are now boycotting A&F?  How do you really feel about Michael Jeffries response?

UPDATE!  Shortly after posting this, Erika Napoletano uploaded her response on this subject to YouTube.  HILARIOUS!