They call it “Karma”

Grimace, seems pretty happy. He must be hiding his pain inside.

Back when I was a youngster, my band teacher, Mr. R,  occasionally would have his back go out on him.  Part of me found his bent-over, nearly knuckle-dragging gait to be amusing, but the bigger part of me sympathized with Mr. R.  I’d never experienced pain like what he’d described, his mouth held in a grimace as he stooped over at the Conductor’s stand, baton in one hand while the other braced against his back.

Years passed and multiple injuries have had their way with me.  Last year, I experienced a “back spasm” for the first time as I walked down the hallway in the house, an intense, stabbing pain that gripped my back and caused me to pitch forward nearly in the Downward Dog, fingertips pushed into the carpet as I practiced my deep-breathing exercises, waiting for the pain to subside.

Tuesday I started to pack for a photo shoot I had on Wednesday.  I required a lot of clothes, props, shoes, etc., and so I packed my big suitcase with clothes and a medium one with footwear.  Shoots, even the best-planned ones, can sometimes get switched up and models often bring extra outfits “just in case”.  We often have to bring hair and makeup supplies, and while we usually don’t use everything we bring, the one time we don’t have it is the one time we’ll need it.  Admittedly, I pack more for a photo shoot than I do traveling overseas for two weeks.

I lugged around all of my gear for two days and after I arrived home yesterday, I noticed my back was a little sore but I didn’t think too much of it.  I’d done a lot of driving in two days, plus hauling all of that gear, two little slips-and-no-falls on some ice and I was tired.  Having a sore back didn’t seem a big deal.

That was, of course, until I woke up this morning and made it through brushing my teeth.  My back was sore, but then it was really sore.  I walked out of the bathroom and I started to take on the look of a model for an Evolution of Man poster.  I sucked in my breath as I reached for my back, the pain radiating from my back to my sides to my rib cage.

That’s me, the first one in the line-up.

I hobbled to the couch, taking up the “Child’s Pose”, feeling the pain subside.  After a few minutes, I felt good enough to mix myself up a green smoothie for breakfast and made my way into the kitchen.  I hurt.  I hurt everywhere.  I sent Mr. Muse an email saying my back hurt and I was going to sit on the couch, spun up my smoothie and made my way back to the couch. 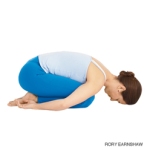 Even though I didn’t spend more than a few moments mildly amused at Mr. R’s lying flat on his back on the tiers in the band room (which he’d painted to look like a piano… it was really awesome), those brief moments of amusement at another’s pain have caught up to me.  I found myself hobbling back to the laptop, searching on WebMD for things I could do about back pain (pain meds, a little rest, lots of stretching, etc.) and had to stop as I was hurting so bad it had brought me to tears.  I took some pain meds, called the doctors office while back in the Child’s Pose on the couch and then made my way to the floor so I could lay flat on my back with my feet up in the armchair.  After an hour, I felt the pain release it’s grip a little.  Thank goodness.

I’ll be taking it easy this weekend, but should I still be hurting come Monday, I’ll be heading to the doctor and requesting some super-duty pain meds.  I don’t often say that, but damn.   Pain that can bring me to tears is not welcome.  Ain’t nobody got time for that.

9 Responses to They call it “Karma”