At least I’m not chewing on my hands… yet 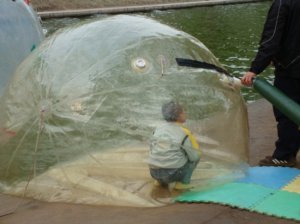 Just another fun-filled day inside the bubble.

Remember how I’ve yammered on in the past about how I’m just “this” side of living in a bubble due to allergies?  That margin has grown a bit smaller.  The last few summers have found me developing another intermittent and annoying allergy to “something”.  The palms of my hands and between my fingers and the soles of my feet and between my toes gets intensely itchy.  We’re talking touched-stinging-nettles itchy – so it burns, too.  I had forgotten all about it until it started up again a couple weeks ago.  I was mind my own business at the dining table when I decided to head outside into the blazing heat for some reason and didn’t put shoes on my feet.  Moments after I came back inside, the itching started.

So they tell me that this is just the same as swimming but without that uncomfortable wet feeling. Hey, what happens if this deflates while I’m out here?

I started to notice that one or both palms would begin itching.  Then it was between the fingers.  Then it was the inside of the wrist.  No rash, no anything, just itching and burning. Then I remembered that I went through this last summer.  And the summer before that.  It’s been great!

I had images of dogs coming into the vet clinic in the summer months with red and raw paws that they’d been chewing on because of summer allergies.  Their licking and chewing gets so bad that they can have the skin become infected.

So, I sat there, laughing to myself for a while, thankful that I wasn’t sitting there with my foot hiked up to my teeth, chewing on my feet for all I was worth.  I’m flexible, but after a while I bet my hip would give out and then where would I be?

(Aren’t you all thankful I didn’t toss up all kinds of photos of nasty, red paws?)

So, with that image in my head, I proceeded to the Interweb to do a bit of research on my itchy paws.  I came up with… nothing.  Oh, there are LOTS of people who suffer from the same thing… but everyone has come up empty-handed on the reasons, other than it’s seasonal.  Well, at least I have that going for me.  Guess it’s time to start planning for life in my bubble for whenever that time comes.