I’m going to get political for a moment

Normally I’d leave the political stuff to Jeff for his blog, but tomorrow in the state of Wisconsin is a BIG political day:  Governor Recall Elections.  Scott Walker vs. Tom Barrett. 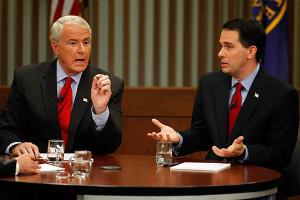 Barrett on the right, Walker on the left.
Thanks to http://dancingczars.wordpress.com/ for the image.

I may only have been on the earth for 36 years, but I’ve not seen such heated discussions and outright hatred for “the other side” of a political issue than I have here with the recall elections.  Families have been set against each other due to political views.  Friends no longer speaking to each other.  Cats and dogs… living together!

I see the staunch Republicans waving their flags of lowering taxes on the rich because it’s the rich that own small businesses and small business create 70% of the new jobs.  I work for a small business at job #1 – the owners aren’t “rich”… in fact, they cut their paychecks in half for over a year due to the economy so they could keep as many employees as possible working.  The company is small, I see the balance sheets, believe me… nobody is swimming in dough.  Same story at Job #2 – a restaurant – the owner just started keeping his tips to pay himself.  Sorry GOP, the “wealthy” small business owners I know… aren’t wealthy.

THEN, we have the Tea Partiers waving their independence placards with rampant spelling errors.  I get it… the whole Boston Tea Party thing, rail against the establishment and all that.  I was a History major in college.  If you really want to be taken seriously, please… for the love of saving face alone – please use Spell Check before WRITING your signs.

THEN, we have the Democrats.  Yes, I traditionally vote for Democrats, but with all the squealing about union busting and so on… I am torn.  There was a time and a place for unions, and there still is to a certain extent, but the unions I’m familiar with evolved into protectionist enclaves rewarding zero-job skills or lackadaisical work ethics or just absolutely no work ethics at all.  The teachers union that protected teachers who SHOULD have been fired years, if not decades before retirement; the various industrial unions that continually reinstated workers who DESERVED to be fired only because they paid their union dues.  Yes, please… let’s continue to reward mediocrity.

Where does that leave me?  I’m a numbers person… what do the numbers say.  Right now, the numbers involving the state are pretty horrible.  Governor Walker has successfully divided the state, and as Abraham Lincoln started his House Divided Speech, “A house divided against itself cannot stand.”  Walker has rejiggered voting precincts that will sway voting in favor of the GOP and has Super PACS, like those run by the Koch Brothers, filling his coffers.  Sadly, with the Supreme Court ruling saying corporations are people – until or unless that is overturned, we’re stuck with corporations telling Americans what we should believe.  Take a hint from Franklin D. Roosevelt, “The liberty of a democracy is not safe if the people tolerate the growth of private power to a point where it comes stronger than their democratic state itself. That, in its essence, is fascism – ownership of government by an individual, by a group.”

I’m not good at following the flock of sheep around (unless it’s an actual flock of sheep… and they need herding), in fact, most of the time when there is a crowd making a lot of noise, I head the other way.  This election has a lot of noise coming from both sides, and not a whole lot of the middle is being heard.  What saddens me is the vast number of people who aren’t going out  and researching the numbers being spouted off by both sides.  What we are hearing in the media from the GOP side is shockingly innaccurate.  And why doesn’t Governor Walker just come out and say why it is that his employees when he was County Executive in Milwaukee are being investigated… and why he needs a legal defense fund?

Sorry, Governor Walker… numbers, accurate numbers, don’t lie, a house divided CANNOT stand and your dalliances with the Koch Brothers is stomach-turning; it’s time for me to vote for the “lesser of the weevils”.