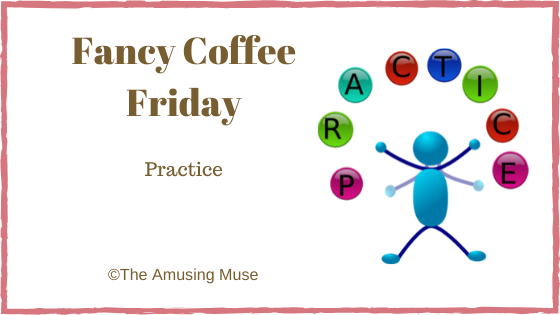 “Have you been practicing?” I dreaded that question. Much like confession when I was in grade school where I didn’t have anything to confess, I knew full well that responding, “No,” was not the correct answer. This is not to say that I blatantly lied. Technically speaking, and given the broad definition of the word, I had practiced… a little. So, I would say, “Yes,” only admitting that my practicing hadn’t been daily only if pressed further.

Sometimes I was prodded for more information, but most of the time, I wasn’t. I knew, however, that being on the receiving end of those sideways glances meant that my music teacher knew they weren’t getting the whole truth. “Practice,” in my opinion, was a dirty word.

Gladly, my views on practicing are adjusting.

Recently, I took a class on the basics of meditation, and it was there that I had an “Ah HA!” moment when the instructor spoke about how yoga and meditation are always called “practice.” They talked about how in our culture, we are so goal-oriented that we often confuse practicing with performance.

I realized that my idea of practice was not a place to flounder and make mistakes. Practice, for me, as the meditation instructor said, was performance. Always. There was never a moment that I thought, “Okay, I’ll work on Holst’s ‘Mars’ for fifteen minutes every day because that will make me a better trombonist.” Instead, my brain thought, “If I play this and I mess up, that means I’m a horrible trombonist, and so I’m just going to save my playing for the classroom and concert halls.”

Thankfully, I had a natural talent for playing, but this is also where my thought process of practicing continued to skew. After all, if I was already good at playing without practicing, why did I need to practice at all?

I possessed a natural talent for a lot of things: soccer, softball, music, horseback riding, science… And my ego was such that I expected to be a virtuoso in everything I did. Even those times of being utterly humbled by one of the ponies or horses because I was being an egotistical little shit, my beliefs were seldom rattled. I was a human, and therefore, some horse giving me a toss wasn’t a failing on my part, it was because the horse was a stupid beast.

Thankfully, I grew out of thinking I was superior to animals (mostly) about the time I grew out of my teens. True humbling in that experience came later.

I did not grow out of the idea of practice being performance, though. I continued to view anything I wanted to do that involved practice as a high-stakes act. It didn’t matter that there was no actual audience, the one in my head had high expectations and an error, any error, on my part, meant that I was a fraud. A charlatan.

A few more yoga classes and some pondering on this thinking about practicing versus performing, and I began to see just how flawed that “always-on” mentality is. No wonder I always felt stressed!

So, it was with gratitude that I listened to various instructors this month talk about forgiveness, for others, yes, but mostly for ourselves for not living up to the expectations we place upon ourselves. I listened to a reminder that “resolutions” often carry negative connotations while “intentions” usually carry good ones. I quietly sat while an instructor reminded us that yoga is “always a practice… there is no goal, no endpoint, there is showing up and realizing that every day is different.”

And then I started to listen to a new audiobook, “This is the Story of a Happy Marriage” by Ann Patchett. In one of her essays, she talks about writing. She spoke of her inner critic, always telling her things she was writing weren’t good enough and that because she was listening to that voice, she’d stop writing for months at a time. Eventually, Ms. Patchett came to realize that she had to shut down that critic. Separating it from the process of writing until whatever she was working on was done; otherwise she’d never get anything finished. She also spoke of procrastination and how no matter how much she loves to write, she would do anything else but write if she didn’t force herself to sit down and get words on paper.

I felt a few more puzzle pieces fall into place. I have a master’s degree in procrastination. No matter how busy I am, how many tasks I have accomplished in a day, rest assured that they were done so I could avoid doing something else – usually writing. Sometimes homework.

January has been quite the month already, and it’s still not done, but I sit here, writing, a bit more enlightened. A bit more humbled. A bit more ready to tell that egotistical little shit in my head to be quiet because it’s okay if I fail and flounder. I don’t have to be performance perfect. I know I will fall on my face in yoga some days, so it’s perfectly reasonable that sometimes I will write crap.

In either case, I can only continue to improve.

In other words, I need to practice.

The Amusing Muse is a student, writer, and collector of amaryllis bulbs who lives in Southern Wisconsin. She has been practicing yoga for two years. This year she started running again, using a Couch-to-5K schedule, but doubts she will run her first 5K in eight weeks – more likely it will be eight months.