Fancy Coffee Friday: Under The Influence 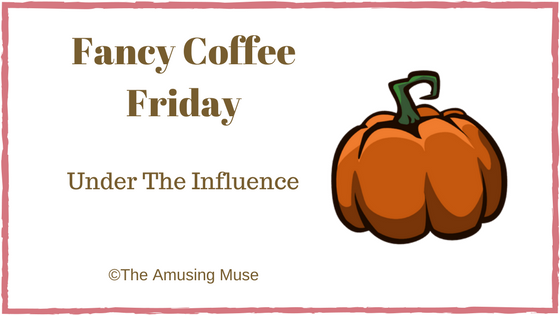 Mr. Muse and I decided many years back to remain child-free. We have a handful of couples we’re friends with who have also chosen the same path. Contrary to popular opinion, this isn’t due to a lack of enjoyment of children, because when you get us all around kids, especially kids in possession of a curious minds – we all become teachers, mentors, and instructors.

We’re lucky to have a very diverse group of friends who work in all manner of career and hail from around the globe. Differences of opinions are not unusual, but besides finding common ground in a variety of interests, we all encourage kids who come to our homes to experiment. Case in point? Our annual Fall Fry Fest which took place last weekend.

Some years back, Mr. Muse built a small trebuchet, capable of launching pumpkins into infinity and beyond, or at least across the yard. We adults (and chickens… and goats…) all enjoy when a pumpkin “pies” on impact, and for years now friends’ children have been exposed to the annual “chunkin’” event so that now, the oldest, was coming into the house asking how she could “blow up a pumpkin?”

Ever-encouraging of experimentation, we talked about what household items she could try first (vinegar and baking soda) to see if it would work. Requisitioning a discarded wine cork, finding a large needle in the “veterinary” drawer in the kitchen, we happened upon a plan to drill a hole into the pumpkin, fill with baking soda, cork it, and then inject white vinegar inside to see if that would create an immense enough reaction.

“But what if it doesn’t work?” she asked.

“Then you know the experiment failed, and you have to try something else,” I replied.

At eleven years old, Megan*, the one couple’s daughter is the oldest of the kiddos. We’ve watched her grow up, and a few years ago we watched her stand at the trebuchet, talking to herself, working out the trajectory of her pumpkin ammo, aiming, firing, resetting, and trying again. We all stood back and watched with pride this sprite of a girl work things out on her own.

The youngest kiddos this year are four-year-old twins, complete with a private language as many sets of twins have, but they watched Megan and were soon following her around. I headed to the woodshop with a group of children and another friend, and ducking out to grab Mr. Muse for some help, was met by the four-year-olds’ father’s asking, “Is this the way to the Girl’s Workshop?” I laughed and said they were on the right path.

I would like to say that after numerous trials, the baking soda and vinegar combination worked and exploded into glorious “pie,” but after a few tests and failures, it had not. There was then a shift to a Ziploc baggy with the same ingredients and a quick discussion about mass followed by a failure to launch. Quickly remedied, I saw from the kitchen window, Megan adding a few of the tennis balls from the dog toy basket, and a successful foam-and-spew launching.

A breathless and excited tween entered the house and asked for a can of carbonated water because “if you shake a can it builds up the pressure and could explode.” I first asked what happened with the Ziploc bag, got the response of “well it worked when we added tennis balls,” to which I laughed and said, “Which means when I said you might not have enough mass with the baggy and ingredients alone….” And she quickly rolled her eyes, “…it wouldn’t have enough weight.”

She didn’t see it then, but I was proud of her.

But it wasn’t just me. Later in the evening Megan commandeered the whiteboard from our refrigerator and had begun listing her steps for next fall to make a pumpkin explode. Those of us witnessing her work were all smiling and laughing at her unbounded enthusiasm and interest in making this happen. She started to take offense at the laughing, and I said to her, “You may think we’re laughing AT you, but you may not see how PROUD of you we all are!”

There was a pause, a hint of a smile, and then another friend piped up, “But, we’re still laughing at you,” with a wink for good measure.

With another roll of her eyes, thankfully one in recognition that we were with her and not against her, she launched back into her plans for blowing up a pumpkin.

And that made me think about how it does take a village to raise children to become contributing members of society. While many of the couples we’re friends with have elected to forego procreation, it feels like we are often some of the more enthusiastic mentors of the children in our lives. We encourage when needed and question where appropriate. Eye rolls, foot stomps, and shoulder shrugs aside, kids need people in their lives, even if they aren’t parents, to encourage critical thinking, conscientious behavior, and fun.

If doing so takes just a little bit of baking soda, white vinegar and supervised use of power tools, we can do that.

Also, Megan has gotten Mr. Muse to agree to help her with building a catapult to launch her pumpkins for next fall.

r It all starts with a plan.

*Name changed to protect the innocent.

What is a mentoring experience from your childhood that has stuck with you?

As an adult, what have you helped mentor a child (or children) in learning?

The Amusing Muse is a blogger, writer, and avid reader living in Southern Wisconsin. She’s excited to share that she’d nearly halfway through “War and Peace” on audio book, and she likes it. She’s also never had a Pumpkin Spice Latte.

Clipart in blog title image courtesy of The Balance.

2 Responses to Fancy Coffee Friday: Under The Influence