I’ve always been a bit of a fly by the seat of my pants person, and my next adventure is following along in the same manner. Numerous friends have asked me what I’ll be doing next when I’ve finished up at my present job and many of them have responded shocked, or at least incredulous, that my response is, “I don’t know.” 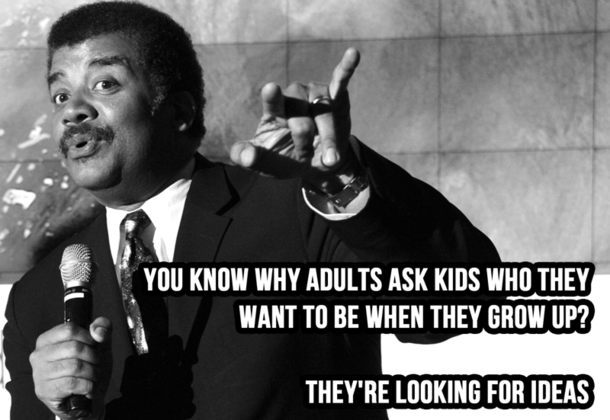 So THAT’S why they ask you when you’re five!
via memeguy.com

But, that’s how I’ve always been. I’ve always just followed my interests where they’ve led me and I’ve had a lot of different jobs, some similar to others, but inevitably, I leave the jobs. Some were because I moved away due to marriage and Mr Muse’s job being the main income, but the others were left because ultimately – I got bored. In my efforts to be completely honest with myself over why I’m leaving my current job, yes, the annoying coworker is definitely a reason, but the bigger issue is that I’m bored. I have perfected the system of what I do to the point where I cannot tweak it any more for better results. I can change up what I do to proven, albeit slower, methods, but ultimately, this project is done. I need something new.

Well… maybe more like 97% sure I don’t know.
via TheOdysseyOnline.com

I literally typed into Google this week, “What’s wrong with me that I can’t be happy doing one thing for a job.” Why? Because I have been bombarded with astonished statements and questions asking me, for lack of better words, “What do you want to be when you grow up?” One of the first results was to the website Puttylike.com and a Ted Talk by the creator of the site, Emilie Wapnik. Watching the video was another Ah Ha! Moment for me, because she explained her story and I thought, “Yeah! I feel the same!”

Then I laughed, because I’ve called myself a Renaissance Woman for years! So, Renaissance Woman, polymath, multipotentialite… whatever label that’s picked, they all point to the same thing: my interests, experiences, are numerous and varied.

Which brings me to a conversation on Twitter about jobs and careers I became involved in earlier this week and I recalled an episode of The Simpsons (if you’ve not figured this out yet, I’m a huge fan of the show) where Homer lists all of the jobs he’s done:

And I laughed, because – it’s me. I’ve done a lot of things, held a lot of jobs, because they sounded interesting. And when I’ve learned all I needed or wanted, I moved on.

I’ve tried to think about a good answer to the question “What do you want to be when you grow up?” As a child, I didn’t know, and I still don’t know. There are just far too many interesting things to do in life. Why did, or do, I need to limit myself to just one thing?

But, all of that is not to say I don’t know anything at all about what I’m doing next. I know this much of what I’ll be doing:

Have you always known what you “wanted to be when you grew up”?

How would you feel about reading some flash fiction? (Written by me.)

Deep thinker whose mind operates at warped speed. Philosopher pondering the big (and little) things in life. Storyteller. Office Ninja. Model. Teller of bad jokes. User of big words.
View all posts by The Amusing Muse →
This entry was posted in Fancy Coffee Friday, Personal, Random Thoughts, Writing and tagged career, careers, Emilie Wapnik, Fancy Coffee Friday, job, jobs, multipotentialite, musings of the amusing muse, polymath, renaissance man, renaissance woman, the amusing muse, What do you want to be when you grow up. Bookmark the permalink.