Fancy Coffee Friday: Comedy of Errors for the Accident Prone

Well, rather than rattle off everything that has kept me from actually writing a decent post about the insects with whom I made friends in Costa Rica, let alone really get to a computer in the evenings between getting home from work and falling asleep… I’ll tell you a more interesting story about how I am becoming more accident prone, or… we could say “klutzy”… when it comes to eating and drinking. 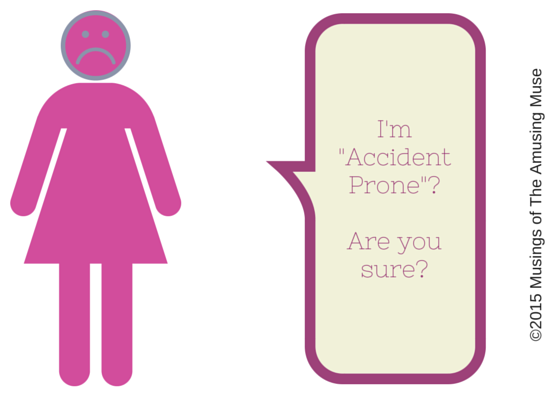 I’ve always been a bit of a danger to myself in the kitchen, knocking pointy objects like knives from the counter to the floor where my little piggies scream in abject horror at their impending doom as if they starred in a scaled down version of Final Destination is not uncommon.  I’ve so far been able to whisk them out of the path of danger at the last moment, thus preserving them for another sandal season.  But, while my toes have been spared, my fingers, hands and forearms have been burned and singed on hot parts of the oven and stove.  I’ve nearly steamed the skin off of my thumb a few times, and I burned my tongue on hot liquid twice just last week.  To top it off, last weekend during a round of Cards Against Humanity with friends, my errant tossing of a card to a friend resulted in The Great Wine Flood of January 2015 and one broken Ikea wine glass.  At least everyone laughed.

Once I add in all of the occasions where I appear to have missed my mouth entirely with my beverage of choice, salad dressing that splatters onto my glasses (or the computer screen as I’m guilty of eating at the computer at work AND at home) and even having stabbed the corner of my mouth with a fork at least a handful of times because I wasn’t paying attention, leaves me wondering if one day someone will decide I’m incapable of being in charge of my own sustenance and they’ll just hook me up to a feeding tube and pump Soylent into me.

Unpleasant thoughts about Soylent aside, I choose to believe that my quick reflexes in the name of self preservation, or at least preservation of my toes, combined with my foible of being a messy eater, only add to my charm.  After all, one of my friends continually drops food into her cleavage and we still invite her out to eat at restaurants.

But, back to the inspiration for this post that wasn’t supposed to be.  I woke up this morning and thought that getting myself a doughnut sounded like a great thing to do.  I invited Mr. Muse to join me for a doughnut purchase, and he mentioned he’d need a fancy coffee as well.  Okay!  On the way in I texted a coworker asking if they wanted a fancy coffee as well.  They responded with a yes and their order and I headed into the coffee shop to order the fancy coffees.

Everything was going well.  I was on a roll filling out the crossword puzzle taped to the pick up counter, my three drinks showed up and I got them into a tray.  I got to the car, sat down, put the tray on my lap, handed Mr. Muse his coffee and as I reached over my shoulder for my seat belt:  disaster struck.  My coworker’s and my order flipped over as Mr. Muse and I sat, horror on our faces as they hit the floor mat.  We scrambled.  Mr. Muse grabbed my coworkers drink first as I reached for mine, the sleeve on the cup flew off and my drink hit the floor mat again.  A choice word escaped my lips and I grabbed it again, and said, “Thankfully I make a point of making sure lids are on tight.”

My coworkers drink barely lost an ounce, mine spewed about a quarter of its contents on the floor mat.  I pouted briefly, took a sip… a peppermint mocha, now with a touch of road salt.  Like the episode of The Simpson’s where Homer roasts a whole pig in his yard, I said, “It’s still good,” and shrugged.  Road salt, bits of teeny-tiny gravel and… whatever else was on the floor mat be damned – I take a multivitamin.

Mr. Muse, shaking his head and looking at my white jeans said, “You may have to go out and buy new jeans today.”  I told him that was nonsense.  I sit in an area of the office where nobody really sees me (after all, they usually forget I’m back there anyway) and I need to wash a load of whites anyway. 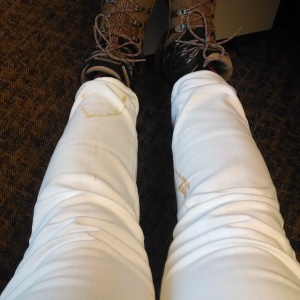 What’s that on your white jeans, Sarah? Oh… just my morning coffee.

6 Responses to Fancy Coffee Friday: Comedy of Errors for the Accident Prone