I could have said “Eastre”, both are pronounced the same as Easter, however they were the early, Pagan, predecessors to modern-day (and Christian) Easter.  What it all boils down to, besides the Church trying to convert everyone to Christianity, is a holiday celebrating the return of spring and resurrection of gods and religious figures.  In essence – the rebirth of planet Earth.  It was celebrated the best way Pagans knew how:  sex.  There were also colored eggs involved as well as rabbits, both of which were religious symbols. 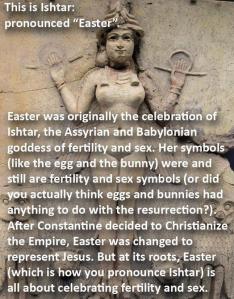 I plan on celebrating by eating my Lindt hollow rabbit.  I already had eggs and a raw cacao and banana smoothie for breakfast.  Later today, I’ll be dining at the in-laws where there is typically hard-boiled eggs (colored) and Jello eggs (guess I better find out if the jello is gluten free), however, my mother in law is very thorough about checking for gluten since the changes so she’ll be turn to tell me if things are safe (but I’m still going to ask).  Then, it’s off to visit friends who asked us to join them last minute for an Easter meal.  We may miss the meal, but we’ll join for the camaraderie.

Now, go eat some eggs, some chocolate bunnies and have sex.