I decided I’d lighten the tone on the blog today…

(Please hold for WordPress or my laptop to have a freak out and sit overnight.)

We return to our regularly scheduled programming.  Thank you for your patience.

Well, that was fun!  Wait, capital F FUN!  Okay… focus; back to it… Fort Lauderdale and Cozumel!

I had gotten the opportunity to be part of the Bare Necessities Big Nude Boat 2013 (you can read my guest post at Homeclothesfree.com here), because I’m an awesome model, and Mr. Muse – because he’s my Mister, got to come along and be part of the staff as well… if he so chose, which he did.  We sailed aboard the Carnival Freedom which left from Fort Lauderdale, Florida, and because it’s winter and we live in Wisconsin, we did the smart thing and scheduled our arrival for the day before we embarked on the cruise.

Mr. Muse booked our hotel at the Best Western Oakland Park Inn (I left a review on TripAdvisor!); they have airport-to-hotel shuttle and hotel-to-cruise terminal shuttle.  We arrived mid-afternoon in hot ‘n sticky Ft. Lauderdale, ready to relax.  The hotel has a pool and a Tiki bar, and we were there on a Friday, the perfect mix!  Mr. Muse and I checked in, put our suitcases in our room, I zipped off the lower legs of my hiking pants and we headed to the pool for relaxation and drinks. 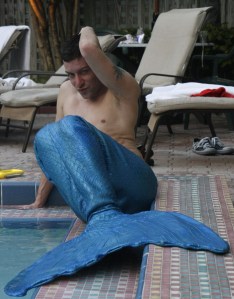 Johnnie, posing for me in his Merman outfit.

As we walked through the gate and I glanced into the pool where five, large burly men were chatting, arms affectionately hung over each other’s shoulders and a few pecks on cheeks were exchanged, I looked at Mr. Muse and said, “There are a bunch of Bears in the pool.”  By the time we had drinks in hand from Marc, the awesome bartender, more “Bears” had arrived and the pool was being surrounded by large, burly gay men.

While I was retrieving drinks, Mr. Muse said he’d talked to a man named “Eddie” who had approached him, saying he bet Mr. Muse and I were wondering what was going on.  Mr. Muse shrugged and said, “Nope… after eight big, burly guys start making out in the pool, we had a good idea that there were a bunch of gay guys at the hotel.  No biggie.”  Most of the hotel had been booked up by men going on Holland America’s ship ms Eurodam for a cruise to Curacao for Carnival.  These guys were GREAT!  SO much fun, and friendly and they were all having a great time.  Mr. Muse and I had a wonderful time around the bar and pool, chatting with Eddie from Dan Howell Travel and BearCruise.com and the other guests who were hanging out in and around the pool.  Thank you to Johnnie (or is it Johnny?) for posing for me – sorry that the photo is a bit dark – I’ll have to work on that.

Since I’m a savvy traveler, I’d done some research on where I might find me some Gluten Free Grub to eat and I came across The Wayward Sailor Pub, literally right around the side of the hotel.  While the Wayward Sailor (TripAdvisor review alert) doesn’t list gluten-free fare among their options, taking a look at their menu informed me that I had some choices that should be safe.  The reviews I read all kept saying the same thing, that the food was fantastic.  They also said that it’s a pub frequented by locals (truth!) and that the owners are Pittsburgh Steelers fans (truth again!).  The only negative reviews were that people smoke inside (it’s a PUB in FLORIDA where it’s LEGAL to smoke inside!  Get over it!) and a few that said the staff was rude.  I was armed with all of the information I needed, of course, I asked Marc the Bartender and other staff at the hotel and all of them gave really high marks as well, so it was off to dinner at the Wayward Sailor.

Our Bartender, Tiffani, was fantastic; not only did they have Angry Orchard Hard Cider on tap, but Tiffani made sure I wouldn’t be “glutened” when eating.  Mr. Muse and I were both completely satisfied with our choices AND I can’t wait to go back and eat there again – I do not say that about many places.  The locals were all very friendly and later in the evening the pub became packed with Brits who had just gotten out of a concert for The Beat; pints of Guinness passed overhead, bodies crushed against the bar (though not too badly) and the bar staff did the best they could to maintain friendly demeanors in spite of the packed-to-the-gills pub with dozens of orders being called to them.  Seriously, the staff was great!  Four hours after we arrived, we bid our adieus and wound our way through the crowd and back to the hotel to crash.  (No pictures for here; they all turned out too dark on my phone.)

Saturday the 9th, we boarded ship and we were off to Cozumel, Mexico.  I’ve been to Cozumel, twice before; I went to the mainland and saw the ruins of Tulum (fantastic).  I’ve done other “touristy” things on the island, but this time I just wanted to find a shady spot under a palm tree, with a cold beverage, some sand, some food and all within stumbling distance to the ship.  Pancho’s Backyard was just the location (another review brought to you on TripAdvisor).  Jose and Luis, our waiters, made sure we were well taken care of – and that we practiced our Spanish.  Jose also made sure I didn’t “gluten” myself; the “corn tortillas” on their menu are exactly that, tortillas made of corn and water, NO wheat flour.  The Nachos con Pollo were awesome, the gazpacho was very tasty and the margaritas (which I now know how to make thanks to Jose) were POTENT.

Before I forget, I made sure to stop at Los Cinco Soles for more placemats for my dining table.  I love that store!

All told… best day in Cozumel, ever!  Now, for more photos.

Our Entertainment (yes, I tipped them… I’m not a douchebag.)