When did EVERYTHING become “hard work”?

Recently in a modeling forum that I help to moderate, a discussion came up from a photographer complaining about how so many models didn’t list where they were located on their profiles.  They ranted on the subject and asked for others thoughts on the matter.  Some wrote in that they were equally frustrated; I, however, defended my position of NOT having every morsel of information available on Facebook and that if someone wanted to know something about me specifically (such as my location) they need only send me a message.  My profile is private, visible to friends only, and those I’m not connected to only get my cover page with a message that says I do not accept “random friend requests”, that an introductory message goes a long way.

The person responded that they didn’t want to offend me but they looked at my page for my location and then searched for me for five minutes and still couldn’t find where I was located, so I could have been 5 blocks from their studio and missed out on a modeling opportunity because they had to look for me.  I wasn’t offended, said as much, and also found their comment humorous, which I also stated.  I also refrained from pointing out the obvious of my having already said I had no information available to people with whom I’m not connected.  I will presume that they spent the 5 minutes searching for me after a 1 minute look on my page where they found nothing, and then spent another three minutes typing up their response in the thread.  So… nearly ten minutes of searching and ranting when they could have simply sent me a private message in a fraction of the time they spent doing all the other stuff just to prove a point that I feel I’ve refuted thusly?

So that brings me back to my question, when did everything become “hard work”?  Was it with the advent of the internet?  How did asking me a direct question become harder work than searching futilely online for information I already said wasn’t available unless they asked.  When did the shift occur that people expect everything to be handed to them without asking and without question?

This person chose made a “mountain out of a mole hill” and made more work for themselves when they could have simply sent me a message with their inquiry.  How did efficiency become “hard work”?  I’ve always thought that being efficient made things easier and run more smoothly.

Curiously, as of this moment in writing this post… they still haven’t responded to the thread.  I find that humorous, too. 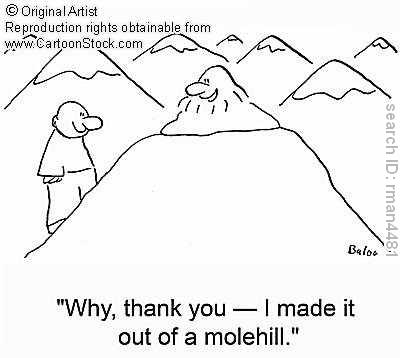 Deep thinker whose mind operates at warped speed. Philosopher pondering the big (and little) things in life. Storyteller. Office Ninja. Model. Teller of bad jokes. User of big words.
View all posts by The Amusing Muse →
This entry was posted in Modeling, Musings, Personal, Random Thoughts and tagged asking a direct question, making mountains out of molehills. Bookmark the permalink.

3 Responses to When did EVERYTHING become “hard work”?