Yes, I’m of an age that I remember that phrase/request/command uttered by the US Forest Service‘s mascot, Woodsy Owl, during my Saturday morning cartoon binges.  Slipped in there between Tom & Jerry and The Looney Tunes, Woodsy got us children caring for our environment (hopefully).  I prefer the “retro” version of Woodsy as opposed to the newer rendition (which is creepy looking), which shouldn’t be seen as unusual as I prefer the retro versions of a lot of things (see my secret desire:  Star Motorcycles V Star *drool*… deco styling in the details).  I digressed… again. 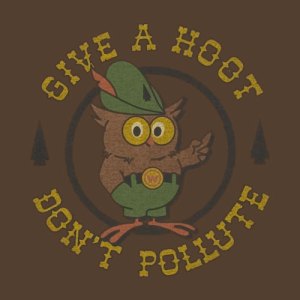 Woodsy’s message was ingrained into my brain along with the messages of Smokey Bear and even though it was a little before my time, I still saw it, Keep America Beautiful’s ad campaign of the “Crying Indian“.  I’ve written before about how my Mom would take us kids for walks down the road with a wagon and we’d pick up the trash in the ditches that accumulated during the winter.  We’d do this a few times a year, keeping things picked up and litter-free.  I’ve kept on with this same mentality and tradition, walking two miles of road around my house, towing my wagon loaded with empty cat litter buckets so I and sort the trash and recycling that I find. 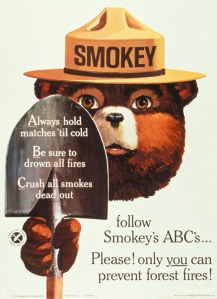 So, imagine how disappointed I am when I see people toss trash out of their cars (apple cores and banana peels don’t count for me – they decompose… and new apple trees are born that way).  I wag my finger at those who toss their cigarette butts out their car windows or open their doors at stop lights and dump their car’s ashtray out on the roadway.  FOR SHAME!

This disappointment I feel is doubly so when I venture to a “wild area”, which should be pristine and unspoiled, and find trash strewn about the parking lot and along the trails.  DH and I pick up trash as we hike, or if it’s an in-and-out trail, make a mental note of where we saw the beer bottle/soda bottle/snack bag/used condom (eww!) to pick it up on our way back.  People!  Is it REALLY that hard to pick up after yourselves?  Sure, I can understand finding the occasional tissue along the trail… my nose runs too, and sometimes they fall out of pockets when you reach in for a new one.  My sympathy doesn’t extend to bottles, cans, snack bags, flip-flops, used condoms (ewww!  but hey – at least they used one), beach towels, Kentucky Fried Chicken buckets or even the flashlight that died on you.  Pick up after your damn self!  (That’s right… I swore!)

The littering isn’t relegated to just the trails and forests, Devil’s Lake is particularly bad for trash being on the lake bed.  DH and I have thought about purchasing mesh bags for the sole purpose of hauling trash we find on the lake bed while snorkeling, out to dispose of properly.  Devil’s Lake isn’t the only place where trash makes its way into the water, the Gulf of Mexico, Caribbean and both Atlantic and Pacific Oceans had flotsam.  I’m sure the Adriatic did as well, but I didn’t see any.

I think when it comes to litter, whether it’s the person doing the littering or the people who pick it up,  it comes down to responsibility.  The lack of responsibility on one side, and the begrudging act of having to be responsible for those who aren’t because someone has to do it.  Yes, I begrudge the people who litter.  I utter oaths and poxes upon them as I pick up the refuse, not just in the forest and on the trail, not just in the lake or sea, but even my own road.

The first two years DH and I lived at our house, we spend picking up trash from the previous owners.  We still haven’t gotten it all because so much had been buried that it is working its way to the surface every spring; the earth trying to spit out the distasteful bits it was made to swallow.  The same two years found DH and myself walking the road, picking up trash.  The other neighbors, we were told just last year, attempted to keep up with the yearly trashing of the road, but just couldn’t handle it anymore and were grateful that DH and I had resumed the watch.

So, to those who are kind enough to read my blog, when you see the plastic bag hanging in the tree, the cup in the parking lot, the grocery store ad fluttering in the grasses, stop and pick it up.  Five seconds out of your day to make the world a better place isn’t a lot to ask of you.  The people over at Stoplittering.com have a great quote:  “Don’t just do what’s your responsibility, do what needs to be done.” ~Pivot

It’s time for me to do what needs to be done… picking up the trash along my road.