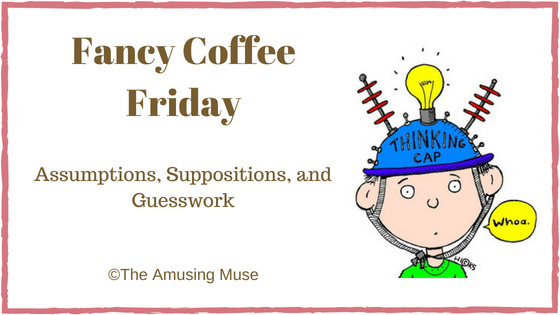 I found myself this week in a shop I hadn’t been to in quite some time. The last time I was there, one of the employees with whom I’d had a good rapport and lots of banter complimented my appearance, but Life just hadn’t taken me in that direction for quite some time. When I walked in the door, immediately, this person called me out for not having been around and said to their coworker, “You know, the LAST time she came in here, I said she looked GOOD in white pants. Then she didn’t come in here again.” They said they’d figured they’d offended me (they hadn’t) or scared me off (nope).

And, the thing was, I HAD wondered about that previous visit and the compliment and how Life came along and led other places to prevent me from stopping in. And, I DID wonder if this employee wondered if their praise had frightened me away from walking through the door. I found it funny that they had supposed my absence was just what I had wondered.

You Know What They Say About Assuming…

“Never ASSUME, because when you ASSUME, you make an ASS of U and ME.”

I believe it’s safe to say that we all go through life making assumptions. “I thought YOU were going to stop for milk on the way home.” “I would have assumed you’d have filled the gas tank when you drove the car yesterday.” “You didn’t return my call right away, so I assumed you were angry with me.”

We all do it. Even when we try to be aware of what we are doing and thinking and making every effort to avoid assuming – we still do it. Assumptions are, as a general rule of thumb, wrong. They make mountains out of molehills. They cause people to avoid potentially uncomfortable discussions until they become excruciating diatribes.

“Supposing is good, but finding out is better.”
― Mark Twain

Perhaps all of the assumption and supposition I witnessed early in my life, whether in the family or with friends, led me to develop the skill of directness. Curiously, this last week also had a tweet cross my timeline:

I think once someone called me African-American even though I am Nigerian and was in Ireland.

I shared it and said that early in my acquaintance with my friend Jermaine, I asked him “Are you ‘Black’ or are you ‘African-American’ because the question is going to come up and I need to know how to respond?” After briefly giving me a shocked look, he let out a BIG laugh and said, “Girl, I’m Black because I ain’t never been to Africa.” Later that day, in a conversation with a client where I was informing them they needed to talk to the manager, they uncomfortably fumbled over what to say, and I responded, “Yes, the Black man over there.” The look on their face was priceless, somewhere between shock and horror, but the information was just what was needed at that moment.

Was that a less-than-politically-correct moment? Perhaps. Taken out of context, I’m sure it would offend some people, but judging my friend Jermaine, and taking a calculated risk, I made the leap, as it were, to ask. That directness has served me well.

Guesswork often leads to terrible outcomes. “What is this medication for?” “Well, I guess it’s for gout, but… who knows.” Guessing what others are going to say, what they think, or what they might do, leaves us behind the eight-ball. It leaves us reacting to the big dragons of our imagination when we could genuinely save ourselves from trudging around in all of that heavy armor by just being direct in our questions and our responses.

“Do you like this movie?” “No, it’s terrible, and we should leave.”

“Do you like this dish?” “Yes! It’s fantastic, and even the garnish is eye-catching.”

Instead, we’re like the blind leading the blind. Or guinea pigs running on a track. Or lemmings off a cliff. Why? Because it’s easier, and we humans like easy. We’re afraid of the pain of ripping off a band-aid, so we ignore it and anything that band-aid covers until things have grown together into a nasty mess forgetting that it would have been FAR easier to address the issue early.

I guess when it comes down to it (see! I’m guessing here), the best we can do is be aware of our assumptions and suppositions. We may not eliminate them entirely, but we can make a reasonable effort at diminishing their instances.

And the employee at the shop? After some reassurance that “Life happened” we were square, and all was well.

I also promised to be sure to wear white pants when next I stopped in.

What is a moment, or occasion in your life in which you assumed/supposed/guessed and you were wrong?

The Amusing Muse is a writer, beekeeper, and armchair philosopher living in Southern Wisconsin. She recently discovered that there is a genetic reason she thinks blue M & M’s taste terrible and congeners in brown liquor make her feel horrible. She also eats her French Fries first, by sorting by size, color, and perceived crunchiness, and then pairing like-with-like before dipping in ketchup and eating.