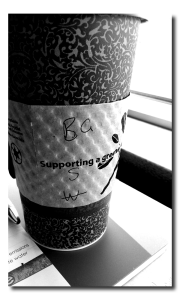 “Coffee Shorthand”, taken on my Android, edited with the Photo Editor app.

The title of this post is not entirely accurate.  While I am truly missing a button labeled “compassion”, I am a very compassionate person in many situations.  I do, nevertheless, find myself in a situation with one particular person where my compassion level went from full-tilt to “I-don’t-give-a-shit”.

Because I feel that the desire by this person for compassion from their fellow man is disingenuous.  I refuse to ask how they are doing on principal alone simply for the fact that I will hear the latest woe no less than five-to-eight times in a day.  Oh, the stories are dramatic, peppered with adjectives and adverbs and sensational dialogue to keep the listener on the edge of their seat with concern and anxiety of the outcome.  Any opportunity to smother another soul with their narrative of misfortune is grasped and pinned to the floor in a chokehold until it has given its last kick in the throes of death.

Yesterday was another one of those days.  I sipped my coffee, worked my ass off (I wish that was more literal than figurative) and pretended not to hear the story repeated to engender sympathy and attention.  I ignored the glances in my direction at times throughout the day when I continued working on projects as if nothing was amiss (because it wasn’t).

And, in the afternoon, when yet another catastrophe had hit and there were repeated dives to the box of tissues and much ado about the blowing of ones nose, I pretended to not notice.  I pressed on in my tasks, having been pushed behind due to being shorthanded for two days, and answered in monosyllabic sentences that sounded more like guttural sounds from early man.  This didn’t save me from an onslaught of openers tossed at me to get me to ask about the latest (or earlier) calamity.

I’m not good at eliciting sympathy in others, nor do I have the desire to, in times of emotional or physical wounding.  My problems are just that, my problems.  I figure that everyone else has their own issues to deal with that they don’t need to be saddled with mine, too.  However, this can backfire on me in those times where something really has gone awry – when people find out, they swoop in and want to take care of me.  That’s a good thing I suppose, but I’m a miserable patient because unless I feel life or limb is literally at risk, “it’s all good and I’m fine, now go away.”  Those moments I do talk about something bad that’s befallen me, it’s matter-of-factly stated, a “well ain’t that just a kick in the nuts” observation with perhaps an inquiry of “what would you do in this situation,” and then I move on.  So, imagine my consternation with people who aren’t the same way.

Today, on this Fancy Coffee Friday, I will once more be seated in my pilots chair, at my command center, playing music in the background, sipping my Non-Fat, No-Whip Peppermint Mocha and not pressing my compassion button.

Do you have a person in your life who  is a “Drama Queen”?  A hypochondriac?

Do you “feed the beast” when confronted with this person or do you do your best to “let sleeping dogs lie”?